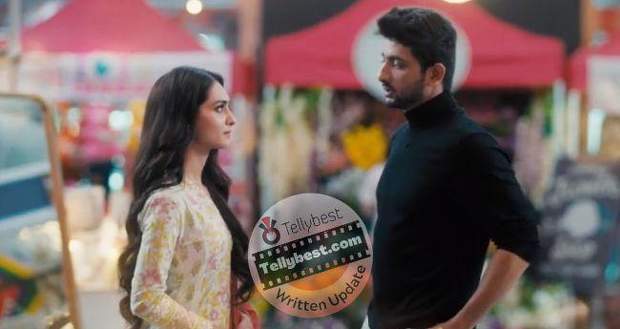 Further, Daksha tells her husband that she will take all of Pratiksha's property once she marries the family.

On the other hand, Hansa tells her husband that he is very naive and tells him that Diksha is very cunning and greedy.

However, Chachu tells Hansa that he cares about Pratiksha the most and will do anything to get her married.

On the day of the wedding, Pratiksha cries in her room recalling her mother's words and how she used to get excited about her marriage.

Just then, she sees Bhairvi's spirit there and cries getting emotional seeing her.

Bhairvi tells Pratiksha that she has come to give her blessing and sees her as a bride with her own eyes.

However, Pratiksha says that it was her parent's last wish to see her get married and comfort her.

Just then, guests come there and tell Parul and Kinjal to go and bring the elders.

However, Parul and Kinjal see Diksha arguing with Hansa and Pratik for the whole property.

Kinjal goes to get Pratiksha while Parul overhears Diksha saying that she will not proceed with the marriage until the property is handed over to Dhaval.

Pratik sees Parul and begs her to not say anything while Parul goes in front of Diksha and accuses her of being the reason why her parents are dead.

Diksha gets shocked while Parul says that she saw them asking her parents for extra gifts before the engagement.

Kinjal and Pratiksha also arrive there while Diksha slaps Parul not being able to hold her anger anymore.

Pratiksha asks Diksha if what Parul said is true and Diksha arrogantly says that she did ask but only for the sake of the rituals.

Dhaval tries to convince Pratiksha while she says that she cannot live with her parent's murderers and give them the respect that her mother asked her to give.

Pratiksha tells Diksha that she breaks this marriage while Diksha angrily says that it is her who is breaking the marriage.

Diksha curses Pratiksha and tells her that she will make sure neither Pratiksha nor her sisters find anyone to marry.

The Dave family leaves while Pratiksha goes to the hall and tells the guest about her marriage breaking and how it is a blessing of theirs that she did not get married.

Afterward, Pratiksha goes to her room and cries while Kinjal and Parul come there and hug their sister.

Pratik sees them and hopes that this incident doesn't break the sisters.

Meanwhile, Hansa admires the jewelry on herself through the mirror when she gets a call from her nephew Malhar.

However, she tells him that she is busy and disconnects the call, which makes Malhar curious.

Hansa thinks about Pratik telling him that the whole property belongs to the three sisters only.

Malhar again calls Hansa and tells him that he will make her life set once his life is settled and will give her anything she wants.

Hansa forms a plan and tells Malhar that she has a plan that will make both their lives set.

Malhar asks her what she is planning and she tells him that he will have to get married to Pratiksha.

© Copyright tellybest.com, 2022, 2023. All Rights Reserved. Unauthorized use and/or duplication of any material from tellybest.com without written permission is strictly prohibited.
Cached Saved on: Thursday 26th of January 2023 05:57:52 PMCached Disp on: Thursday 9th of February 2023 06:07:47 AM