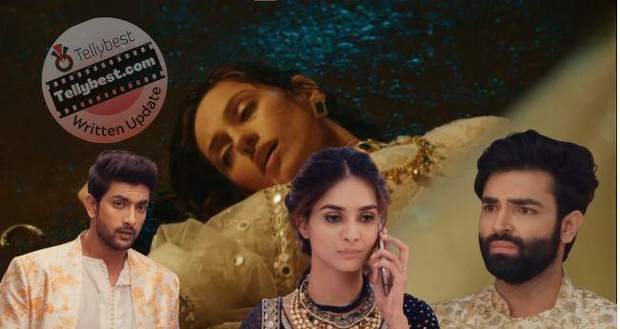 Today's Dharam Patni 3rd January 2023 episode starts with Ravi trying to keep hope as he talks to an unconscious Kirti and tells her to stay awake as they will reach home in ten minutes.

Further, he tells Kirti that they still have to go shopping as he holds her hand and tells her that she is looking very pretty.

He notices the engagement ring he had put on her and breaks down telling her to stay with him.

On the other hand, Malhar imagines getting pulled over by the police and him accidentally spilling the truth which ruins his police career before it even starts.

He gets back to the present as he hears Prateeksha calling out to him and the police checking cars in front of him.

Meanwhile, Ravi reaches the hospital with Keerti in his hands while the receptionist stops him stating that they need to do the formalities.

However, the doctor rushes there and asks if he is Ravi Randhawa while telling the ward boy to take Keerti inside.

Malhar gets out of the car and requests Pratiksha to drive the car since his police career will be doomed if he gets caught and jailed for a drunk-and-drive case.

Pratiksha refuses saying that she does not know how to drive while Malhar talks about her mother and convinces her.

She agrees and sits in the driver's seat.

She slowly drives the car and the police let them go after checking.

Malhar feels relieved as he thinks that Keerti will die his death and he will enjoy Keerti's forsaken life.

Back at the hospital, Keerti subconsciously tightens her grip on Ravi's hand he requests the doctor to let him inside with Keerti since he knows Keerti wants him to go inside with her.

The doctor understands Ravi's emotions and lets him come inside the Operation Theater.

Keerti and Ravi's family also arrives and asks the receptionist who informs them that Kirti is in critical condition.

The family gets worried when the doctor requests Ravi to go outside of the operation theater as he needs to operate now.

Meanwhile, at the Parekh house, Hansa gets very sick while Pratiksha tells Pratik that she is sure Hansa has had food poisoning.

Parekh agrees and tells Pratiksha that he will take care of Hansa.

At the hospital, Kirti's father consoles his wife and angrily tells her that the perpetrator won't be forgiven.