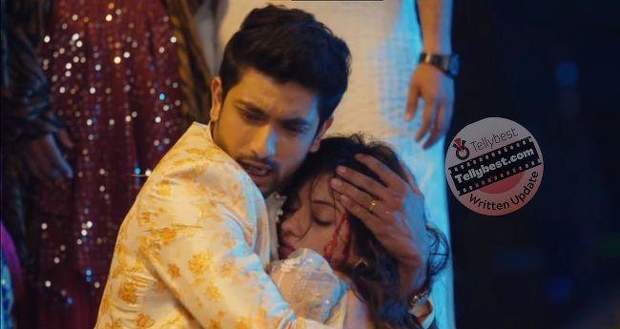 Today's Dharam Patni 4th January 2023 episode starts with Hansa's stomachache getting even more worse as they decide to go to the hospital.

Meanwhile, at the hospital, the ladies of Keerti's family cry as they inform Ravi's father about the situation.

Meanwhile, Pratiksha goes from near the same operation theater where Keerti and Ravi are kept.

She prays to the lord that the person who is in the operation theater gets better.

Pratiksha goes back to the doctor's office where she laughs hearing Hansa tell the doctor to check her thoughtfully.

Hansa tells the doctor to get her checked if she's pregnant or not while Pratik tells her to stay quiet and apologizes to the doctor.

The doctor laughs as Pratik says that Hansa does not want the trip to the hospital to go without any result.

On the other hand, the nurse tells Keerti's family that they need an AB-negative blood group.

Ravi hears this and comes out of the hospital room as he starts arguing with a nurse.

However, the nurse calms him down and tells him that the hospital does not have AB-negative blood in the hospital's blood bank.

Ravi rushes out of the hospital and goes into his car.

Meanwhile, Pratiksha overhears the nurse talking about Keerti needing blood while she goes to them and tells them to take her blood as she is AB-negative.

The nurse informs Keerti's mother about a girl coming into their lives as a savior as she overheard them and has agreed to give blood to Kirti.

Kirti's mother gets glad when Ravi returns and asks her about the blood arrangement.

The nurse says that she is going to give coffee to the girl and Ravi accompanies her to thank her.

However, they find no one else other than the unconscious Keerti.

Elsewhere, Pratiksha is with Kinjal who tells her that they are getting late to go home and scolds her for giving blood to a stranger.

Prateeksha says that she hopes the girl whom she gave blood to is fine.

Back in Keerti's hospital room, the nurses apologize for not getting the information about the girl while Ravi's eyes land on the get well soon note written by Pratiksha and gets happy.

He tells Keerti that she should get better so that they can thank the girl together.