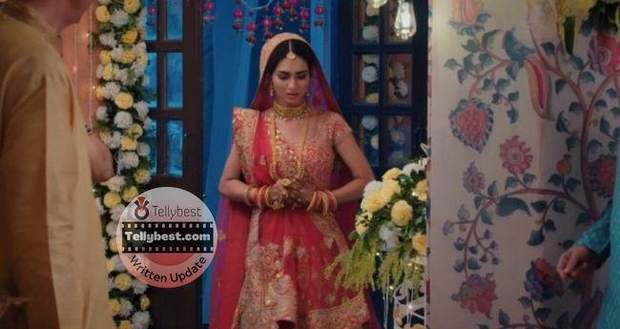 Today's Dharam Patni 5th December 2022 episode starts with Ravi trying to convince Kirti while she rushes inside her home.

However, Kirti's sister mocks Ravi asking him if he still wasn't able to confess to her.

He asks her how he should confess to her while she gets close to him and talks to him sensually while telling him that no one can separate him from herself.

However, Ravi mistakes her confession as an idea of what to say and writes it down on his phone while asking her to repeat what she said.

She gets upset and annoyed as she repeats the words and leaves saying that he is glad to have her as a sister-in-law.

Back at the Parekh house, Pratik is talking to matchmaker Rasila and tells her to find a suitable boy for his daughter Pratiksha.

However, Pratiksha truthfully reveals to the matchmaker that her marriage had gotten broken off in Junagadh.

The matchmaker gasps as she asks if she is the girl who was left at the altar and shows Pratik chats in the matchmaking community that tell how rude and ill-mannered Pratiksha is.

Hansa thinks to take advantage of the situation and argues with Rasila telling her that she will make sure Pratiksha gets married in the community only.

Further, Hansa suggests Malhar for marriage with Pratiksha and fills his ears while he still seems skeptical.

Meanwhile, Ravi talks to his assistant who calls Kirti and acts as a lady who wants to expose an evil NGO to fix a meeting at the hotel with her.

Ravi thanks his assistant Tanisha while she tells him to go and decorate the hotel as soon as possible as Kirti is very punctual.

Meanwhile, Pratik talks to Pratiksha and tells him that he thinks Malhar is perfect for her but wants her to meet him first and decide for herself if she likes him or not.

Pratik gets a call and leaves while Hansa sits with Pratiksha and convinces her saying that her husband will be devastated if she doesn't get married.

Later, Pratiksha leaves to meet Malhar while Ravi is making sure that the preparation is done.

Prariksha accidentally comes to the hotel where Ravi is while she gets fascinated seeing the decorations.

However, her face gets covered with the snow spray while Ravi doesn't see her face as he was tying his shoelaces.

He mistakes her for Kirti and proposes to her while she removes the snow from her face and reveals her identity.

They both get surprised to see each other while Ravi starts panicking saying that he messed up.

Tanisha calls him just then and tells him that Kirti will come there anytime as she was struck in traffic.

Pratiksha calms Ravi and leaves from there.

Further, Pratiksha bumps into Kirti but doesn't show her face and leaves from there to meet Malhar.

Meanwhile, Malhar looks at the single note of money he has and thinks to leave the hotel without eating anything when Pratiksha comes there.

The waiter comes to take their order but Malhar rudely sends him away while talking to Pratiksha in a superior way and telling him that he is a practical person and is not at all romantic.

Prariksha recalls Ravi's proposal and says that those thinks of things happen only in films or to other people.