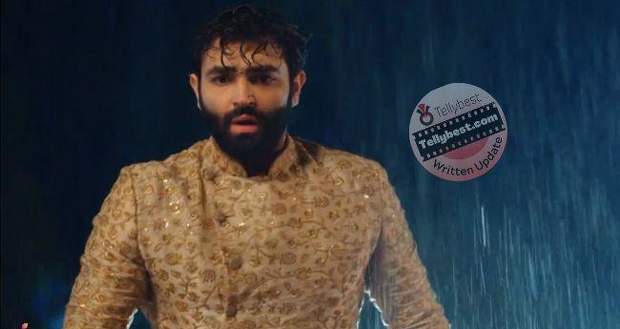 Today's Dharam Patni 5th January 2023 episode starts with Ravi telling unconscious Keerti that they will say thank you together once she wakes up.

However, at the same time, the nurse gets shocked to see the machine beeping very hard but when Ravi asks her what is happening, she does not answer.

At the same time, a junior doctor enters the room and advises Ravi to leave as they need to operate on Keerti with the senior doctor causing Ravi to walk away feeling desperate.

Meanwhile, Pratiksha’s sister tells Hansa how Pratiksha has helped a girl by giving her blood which makes everyone happy.

However, when Pratiksha reveals that the girl is the same one from the next venue, Hansa questions her if she has taken the money from them as a return gift.

Hearing this, Pratik scolds Hansa for thinking about money and Hansa just pouts.

Just then, Pratik gets a call from the person whose car they had rented and goes saying that he is waiting outside to take the car.

However, Pratiksha sees the car and goes to give the car as she realizes that Pratik forgot the car keys.

Meanwhile, Ravi is standing beside Malhar's car while he talks to Kirti's father and Adi.

He angrily says that they do not have the time to waste and tells them that they should look for cars with dents or evidence at the crime scene.

Pratik sees Ravi banging on the car from the balcony and sends Pratiksha there.

However, Ravi leaves before Prateeksha can go while Pratik comes after her and takes the keys from her.

Back inside the hospital, Ravi gets worried seeing the gloomy faces of the family members while the nurse tells him that Keerti is in critical condition.

Ravi goes inside Kirti's room saying that she is awake while the doctor stops others from stopping Ravi.

Kavya comes inside and sits beside Kirti while Kirti's breathing becomes hard.

Ravi rushes and brings the doctor inside while he stands beside Keerti and begs her to not let go of her breath.

However, Keerti's heart rate declines as the machine start making a beeping sound.

Ravi gets shocked while Kirti's father, Gulshan comes there and gets hysterical.

Ravi's father comforts him while Ravi starts trying to wake Keerti up.

The doctor tells Ravi to stop as Keerti's dead.

The doctors start removing the oxygen masks from Keerti while Ravi's mother comforts him.

On the other hand, the goon calls Thakur and informs him that Keerti is dead.

Back at the Randhawa house, Kavya cries seeing her pictures with Kirti while her mother comes there and tells her to bring Ravi for the last rites while holding back her sobs.

Both the mother and daughter hug as they let out their tears after which the mother leaves.

However, Kavya cries even more as she recalls telling Ravi that she hopes his love gets taken away from him.

Meanwhile, Ravi sits on the ground holding Kirti's dupatta as he keeps on recalling all his memories with her and how she told him that she wants only her to become his Dharampatni.

© Copyright tellybest.com, 2022, 2023. All Rights Reserved. Unauthorized use and/or duplication of any material from tellybest.com without written permission is strictly prohibited.
Cached Saved on: Wednesday 25th of January 2023 02:18:06 PMCached Disp on: Thursday 9th of February 2023 05:25:42 AM