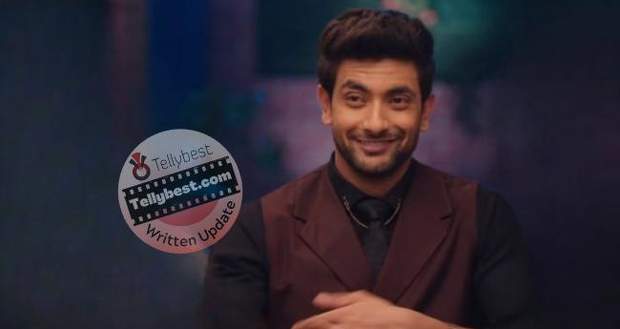 Today's Dharam Patni 6th December 2022 episode starts with Ravi angrily telling the manager to fix everything while Kirti comes and asks him what he is doing here.

Ravi snaps his fingers at the manager while giving a puppy face to Kirti and stating that the machine is fixed.

However, he starts panicking and blabbers in front of Kirti, saying he has arranged everything perfectly to her taste but always messes up when she comes to him.

Further, the couple celebrates and cuts cake while in the hotel nearby, Malhar tells Pratiksha to hold the lift for him while he pays the bill.

Once Pratiksha leaves, he argues with the waiter and gets the bill reduced.

On the other hand, Kirti tells Ravi that she forgot her purse in the hotel and leaves while he goes to the lift.

Praitksha is waiting for Malhar in the lift but Ravi enters it, making it jam accidentally.

Pratiksha and Ravi get surprised to see each other again and she asks him about his proposal while he tells her about all the hooligans that happened before Kirti said yes.

Pratiksha also tells him that she said yes to the proposal while Ravi starts panicking thinking she is talking about him.

However, she calms him down and says that she said yes to another proposal.

On the other hand, Kinjal feels upset in the kitchen recalling Hansa's words while Parul comes there.

Kinjal tells her that she heard Hansa telling Malhar about some jewelry and thinks that it is connected to Pratiksha.

Parul tells Kinjal that she does not like Malhar and wishes that Pratiksha would find someone like the guy who had saved her.

Just then, Pratiksha and Malhar return home and informs the family members that they have agreed to the marriage.

Pratiksha goes to the room with her sister while Hansa sits with Malhar and tells him to be thankful that she convinced Pratiksha to agree to the marriage.

Meanwhile, Malhar keeps talking about how handsome he is & can brag to his friends about marrying a beautiful girl like Pratiksha.

On the other hand, Pratiksha's sisters scold her for saying yes to Malhar while Pratik comes there and asks Pratiksha if she has agreed to the marriage.

Pratiksha says that she has agreed to the marriage on her own and smiles while Hansa says that they should celebrate.

Meanwhile, Ravi and Kirti go to his home where his mom and Harneet Bua are playing cards with the kitty party ladies.

On the other hand, Ravi's sister, Amaira, is doing her facial but she runs to Kirti.

Kirti hugs everyone and helps Ravi's mother cheat in the game while the men of the house return from a business trip.

Ravi tries to talk to his father but gets ignored.

Back at Parekh house, Hansa says that they should get Pratiksha and Malhar engaged after two days in their backyard.

However, Pratik says that he will marry Pratiksha as lavishly as his brother wanted.

Further, Pratik and the siblings leave while Hansa tells Malhar that she will return to Junagadh and bring back the jewelry that will be hers.

© Copyright tellybest.com, 2022, 2023. All Rights Reserved. Unauthorized use and/or duplication of any material from tellybest.com without written permission is strictly prohibited.
Cached Saved on: Wednesday 25th of January 2023 11:52:33 AMCached Disp on: Monday 6th of February 2023 02:32:37 AM