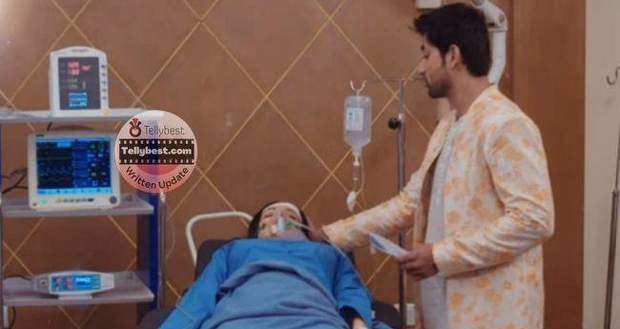 Today's Dharam Patni 6th January 2023 episode starts with Ravi crying as he sits on the floor while he imagines Kirti touching his shoulder.

Ravi cries saying that he knew she would come for him.

Keerti tells him that she had to come while Ravi says that now he will tell everyone that she is there.

Kirti tells him that it does not matter whether she is there or not since she will always be his Dharampatni.

Ravi's voice cracks as he tells her to not say that she is going to leave while she asks him to dance with her.

They both dance as they also do actions like exchanging garlands and filling her hairline to feel truly together.

Ravi hugs the imaginary Keerti and dances with her while trying to not let the smile slip from his face.

On the other hand, Kavya sees Ravi dancing alone in the room and cries as she realizes that Ravi is imagining dancing with her dead sister.

Kavya runs to the elderly and cries into the arms of Ravi's mother as she says that she cannot see Ravi.

She cries as she says that Ravi shattered his room.

The family goes to check on him and shatter as they see Ravi dancing alone in the room.

They brace themselves as they go inside and calm Ravi while his father opens all the windows.

He turns to point at Kirti but sees an empty corner of the room which brings him back to reality.

He blames the family for making his Kirti go away while Kavya comes forward and tries to comfort him by saying that she also sees Kirti.

Kavya tells him that he has to be happy for Kirti while Ravi cries into her arms and tells her that he will be happy if his Kirti comes back to him.

Later, the family watches Kirti's pyre burning as they all recall their moments with Kirti.

However, Ravi is the last one to stay while Kavya recalls the curse she gave and leaves feeling guilty.

Ravi goes back inside the funeral home and cries as he holds Kirti's ashes in his hands.

Elsewhere, Malhar greets Hansa and Pratik who are having breakfast and takes their blessing as it's his first day at the police station.

Just as he is about to leave, the car owner comes there and complains about the dent made in the car that he gave them the previous day.

Ravi's mother as she wonders how her son will cope with the loss of his loved one.

Her husband tells her that God gave him the pain and he will give Ravi the medicine to heal too.

Just then, Ravi comes out and tells the family that he is going to the police station.

© Copyright tellybest.com, 2022, 2023. All Rights Reserved. Unauthorized use and/or duplication of any material from tellybest.com without written permission is strictly prohibited.
Cached Saved on: Wednesday 25th of January 2023 04:30:21 PMCached Disp on: Wednesday 1st of February 2023 06:55:35 PM