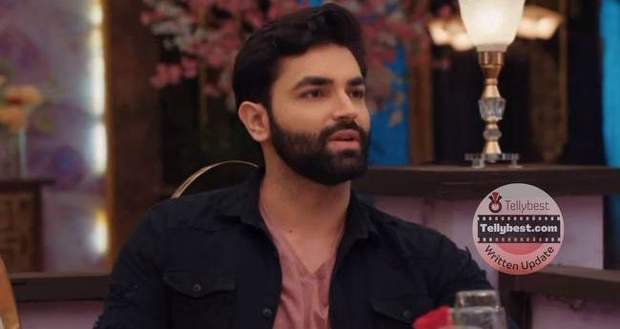 Today's Dharam Patni 7th December 2022 episode starts with Ravi telling the family members that there is a bomb in Dad's bag and getting everyone's attention.

The family starts panicking while Ravi stands on the couch and tells the family that he was just joking.

Ravi further informs them that he has proposed to Kirti and she has also agreed to their proposal.

The family gets happy and asks them how the proposal happened while Ravi's father says that it must have been romantic since Ravi is his son.

However, Kirti nudges Ravi and makes him reveal the truth about how their proposal went.

Later, Ravi and Kirti come to Kirti's house to inform them about their relationship.

Kirti tells the good news to her parents while Ravi goes to Kavya and tells her the news that he is going to get married to her sister.

Kavya's heart falls as she feels her heart breaking into pieces now that her crush for a long time is going to marry her sister.

Ravi takes Kavya downstairs where Kirti tells Ravi that her parents agreed to their engagement.

Ravi gets excited when he goes to Kirti and tells her that he cannot wait to marry her.

Kavya's heart breaks as she hears Kirti says that she and Ravi are going to get engaged after two days.

Kavya tells them that she is very happy for them and wants to go party for celebrating.

Ravi tells Kavya that he will drop her off and will also pick her up while telling her to get ready.

Meanwhile, Malhar is at the carrom game room when his friend tells him that the girl who had rejected him for the 99th time is there with her boyfriend.

Malhar gets angry as he taunts the girl's boyfriend and calls him plastic while he challenges him to a carrom match.

However, the girl's boyfriend beats Malhar in the game while the girl also makes fun of him.

Malhar tells them that he has gotten an even more pretty girl than her as his would-be-wife while they all demand to see the girl to believe his words.

Malhar calls Pratiksha and tells him that he wants to meet her and tells her to come outside her house as he is coming to take her.

At the same time, Kavya enters the bar while a guy gets infatuated with her and tries to impress her.

She talks about Ravi while the guy reveals that his name is also Ravi which makes Kavya agree to dance with him.

However, Kavya imagines dancing with Ravi as the guy gets close to her.

When she comes back to her senses and tries to get away from him, he starts forcing her.

Ravi comes there at the right time and separates the guy from Kavya while telling them a girl's NO means NO only and that he should have backed away when Kavya hold him too.

Further, Ravi gets the guy kicked out while Kavya keeps on taunting the guy saying that he is a loser and her brother-in-law is the best.

Ravi takes Kavya out of the bar.

On the other hand, Malhar brings Pratiksha to his house while she keeps wondering what he wants to talk to her about.

© Copyright tellybest.com, 2022, 2023. All Rights Reserved. Unauthorized use and/or duplication of any material from tellybest.com without written permission is strictly prohibited.
Cached Saved on: Wednesday 25th of January 2023 09:40:20 AMCached Disp on: Wednesday 1st of February 2023 06:56:18 PM