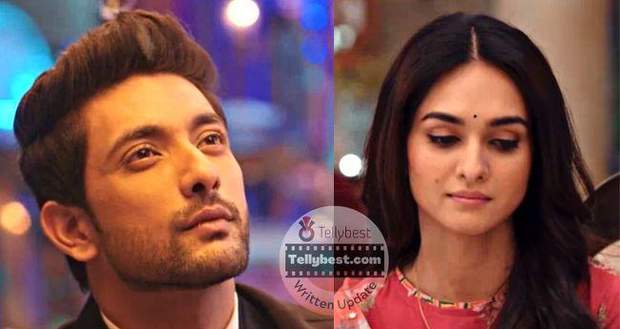 Pratiksha asks Malhar what he wanted to talk to her about while he keeps the door open a little bit so that people outside can listen to their talks.

He further asks Pratiksha saying that she wanted to marry him cause he was handsome and a catch for her right?

However, Pratiksha gets uncomfortable with him and tells him that she wants to leave.

Malhar gets close to her saying that he has a right to her as they are going to get married while thinking that he will be mocked by his friends if she doesn't act domestically.

She pushes him away and leaves while he grabs her by the neck and tells her that he will not let her go.

However, she again manages to push him away and runs away from there while Malhar's friends mock him by telling him to run after her.

On the other hand, Ravi is advising a drunk Kavya that she should not hurt her sister by becoming hungover while Kavya says that she hates her sister as she is the person who hurt her the most.

She tries to talk to him while he goes to get water for her from the back seat.

He goes to give water to Kavya but sees that she's passed out when he bumps into Pratiksha who is running away from him.

He calms her seeing that she is crying and advises her to not let the tears become a burden in her life and that she should keep moving forward.

Further, once he sees that she is not crying anymore, he asks her if she has been harassed.

Pratiksha asks him what if she has been and Ravi tells her that she should fight back against the person who did this to her and become an example for the other girls.

Back at the club, Malhar goes back inside the room to take his keys while his friends mock him and tell him that Pratiksha deserves someone better than him.

Meanwhile, Pratiksha thanks Ravi and goes while Ravi looks at her retreating figure and hopes that she is okay in the future.

On the other hand, Kavya wakes up and asks for water and she drops the water bottle outside the car.

Ravi goes outside the car to pick up the bottle while Kavya also comes outside and tries to get close to Ravi but he gets confused about her actions.

She tells him that she rejected all the boys who had proposed to her cause she loves only him.

He tries to push her away while she tries to kiss him telling him that he belongs to her and that no one can take him away from her.

Finally, Ravi recalls the words of encouragement he gave to Pratiksha about not being so good that people can take advantage of their goodness and pushes her away.

He takes the bottle of water and throws the water on Kavya telling her that there can be nothing between them even if he was not committed to her sister.

He puts her in the car and drives away. Pratiksha enters a temple on the way and thanks God for sending Ravi to help her every time she is in some problem.

Further, Pratiksha returns home and Hansa interrogates her about where she was at late night and she reveals that she cannot marry Malhar.

Hansa gets surprised while Pratiksha repeats the words Ravi had used to encourage her and says that she won't marry someone who tried to harass her.

She goes to her room where her sister comforts her while Hansa thinks that Malhar ruined her whole plan.

Afterward, Kinjal asks Pratiksha where she got so much confidence to stand up to Hansa and Pratiksha reveals that it is none other than Ravi.

Kinjal and Parul share a look while Pratiksha sees a couple outside the window and recalls Ravi proposing to her as she smiles about the memory.

© Copyright tellybest.com, 2022, 2023. All Rights Reserved. Unauthorized use and/or duplication of any material from tellybest.com without written permission is strictly prohibited.
Cached Saved on: Wednesday 25th of January 2023 09:29:06 PMCached Disp on: Tuesday 31st of January 2023 08:12:51 PM