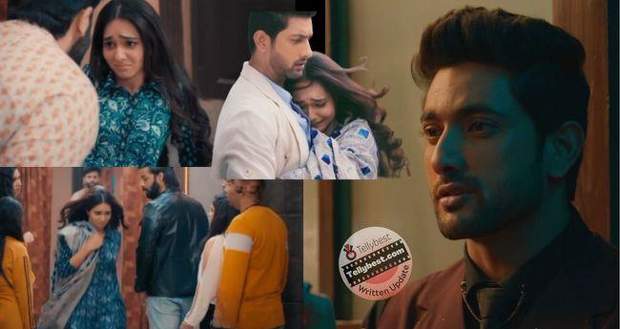 Today's Dharam Patni 9th December 2022 episode starts with Malhar thinking that he will tell Pratiksha that he is not interested in her anymore.

Hansa, however, scolds Malhar for turning into Shakti Kapoor before marriage as Pratiksha is from the village and for whom her respect matters the most.

Malhar then apologizes to Hansa for behaving stupidly and Hansa remarks that she is trying her best to post Malhar to the big police department.

After Malhar walks away, Hansa questions herself about who has changed Pratiksha from a shy girl to a bold one.

On the other hand, Ravi brings a drunk Kavya home and Kavya apologizes to Ravi for behaving this way.

Ravi however tells Kavya that he will forget all about it if Kavya joins his wedding with Keerti wholeheartedly.

Kavya announces that she gets weak in the knees whenever he comes in front of her with sad eyes.

When Ravi looks perplexed and does not know how to respond, Kirti arrives to take Kavya away.

On one hand, Kavya walks away with wobbly legs; on the other hand, Kirti smilingly praises Ravi for behaving like a husband already.

Meanwhile, in Pratiksha’s house, the doctor informs Pratiksha and her sisters that Pratik is having a heart attack, and to save him Pratiksha needs to bring an injection.

Hearing this, an over-dramatic Hansa urges Pratiksha to call Malhar as the chemist shop is near his house so he can bring the injection quickly.

Hansa then goes out of the house and tells Malhar how she has hired the doctor, Jignesh to fake the heart attack.

When Malhar questions Hansa about Pratik’s heart attack, Hansa reveals that Pratik is just having acidity.

Hansa even pretends to faint and orders Malhar to take her home to make Pratiksha feel sympathy.

Once Hansa and Malhar arrive at the house, Malhar urges Pratiksha to take care of Hansa till the doctor gives Pratik the injection.

On one hand, Malhar orders the doctor to give Pratik the vitamin injection; on the other hand, Hansa starts showering Malhar with compliments for saving Pratik’s life.

When Malhar enters the hall, he begs for Pratiksha’s forgiveness for behaving badly with her but Pratiksha just looks at him.

Hansa then manipulates Pratiksha by lying that Pratik got this heart attack when he heard Pratiksha is breaking her engagement.

Pratiksha feels she is causing trouble for Pratik and agrees to the marriage while Kinjal questions her if she is sure.

Pratiksha replies to Kinjal that now she will not change her mind and after everyone walks away, Hansa orders Malhar not to mess up again.

Meanwhile, in Ravi's house, Adi enters Ravi's room and orders him to do a boxing match with him since this is the only time Ravi speaks his mind.

This works as Ravi confesses he has met Pratiksha again and Adi orders him to stay away from her as the universe is conspiring to create turmoil in Ravi's life.

To divert Keerti's mind, Ravi starts romancing her in front of Kavya who burns in jealousy.

After Ravi and Keerti walk away happily, Kavya reminds herself that she needs to accept reality now.

Later, one pandit at Ravi's house informs everyone that Ravi's kundali is weird whereas, in Pratiksha's home, another pandit also reveals that Pratikska's kundali also is absurd.

Afterward, both the pandit announces that Ravi and Pratiksha need to get engaged to their partners the next day since the next date is in seven months.