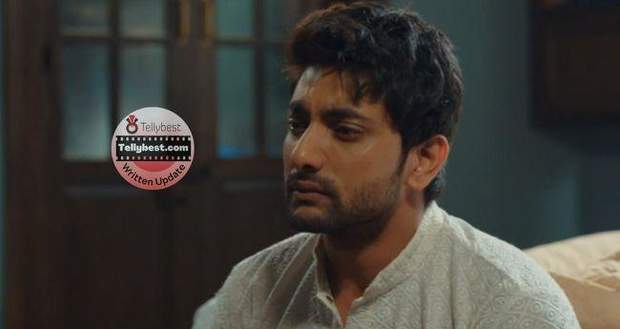 Today's Dharam Patni 9th January 2023 episode starts with Ravi taking the keys from his father and leaving while Adi joins him.

The family gets worried for Ravi when his father tells them that Ravi's anger is much better than him going into depression.

Back at the Parekh house, Ankush, the owner of the car argues with Pratik about the dent while Malhar comes there and takes Ankush with him so that his truth is not revealed.

Hansa praises Malhar while Pratik tells her that Malhar had to take responsibility since he is the one who had booked the car.

At the police station, the police office says that they have short-listed the three cars that were at the venue that day and only need to see which one had damages to find out the real culprit.

Malhar bribes Ankush and gives him money so that he does not have to claim insurance to repair the dent in the car.

Meanwhile, Ravi and Adi arrive at the police station and demand to see the footage while the police officer gets a call from the commissioner to cooperate with Ravi on Keerti's case.

They go and see the CCTV footage which shows Pratiksha talking to the police officer while her car is being checked.

Ravi shows them the dent and the blood marks on the car while Ravi points out that the earring that is missing from Prateeksha's ear is the same one that he found near where Keerti's accident happened.

The police officer scolds Ravi and reminds him that Pratiksha's uncle is also an influential person which angers Ravi.

Ravi tells the police that he will bring the earring from home and leaves while he gets a call from Kavya.

Kavya asks him where he is while Ravi tells her that he has found the person who killed Keerti and is going to catch her.

Ravi shows the earring to Adi and tells him that they will find Pratiksha themselves since the police are scared of Pratiksha's uncle's influence.

Back at the Parekh house, Hansa boasts to Pratiksha and Kinjal about Malhar going to the police station for the first day while Kinjal teases Pratiksha about Ravi being her savior.

Pratiksha tells Kinjal that Ravi will be busy planning his honeymoon and reveals that she met him in the dressing room of the mall the other day.

Kinjal dreams about Prateeksha and Ravi together while saying that there will be some filmy drama in her sister's life for sure.

Ravi and Adi look for Pratiksha around her colony while Pratiksha is also in that same area with the bowl of sweet curd in her hand.

She prays that the girl whose accident happened outside the venue is fine now and leaves.

Later, Pratiksha arrives at Malhar's house and tells him that she brought Dahi Shakkar for him while he tells her to praise how good he looks in the police uniform.

Pratiksha rolls her eyes while Malhar indicates to her that he wants something other than Dahi Shakkar.

However, he just tells her that he needs tissue paper and thinks that he will get what he wants after marriage anyways.

On the other hand, Ravi enters the Parekh house and starts looking around for Pratiksha while Kinjal tells Parul that the hero has come for his heroine.

© Copyright tellybest.com, 2022, 2023. All Rights Reserved. Unauthorized use and/or duplication of any material from tellybest.com without written permission is strictly prohibited.
Cached Saved on: Wednesday 25th of January 2023 01:30:02 PMCached Disp on: Monday 6th of February 2023 04:55:58 AM