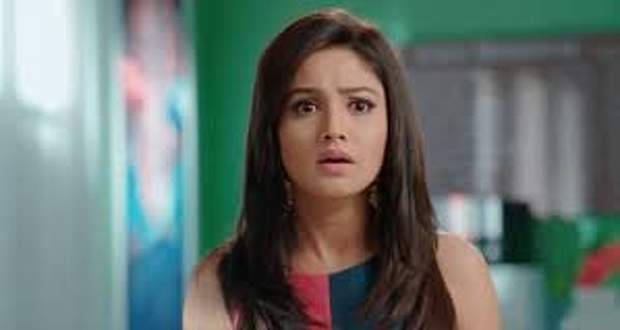 Today's Dil Toh Happy Hai Ji 17 Jul episode starts with Honey. He presses the button on the detonator which produces a beep sound.

Meenu gets worried when she learns that someone has pressed the detonator button.

Rocky asks Mr. Kumar that no one informed him about Home Minister's visit to the school, but Mr. Kumar asks him to concentrate on the task which he has assigned to him.

Meanwhile, Khushi struggles to free herself from the storeroom, whereas Honey gives the bomb detonator to Sweety. Kabir sees that, and he takes the remote from them.

Later on, the Home Minister comes to school. Meenu informs Charlie that they have activated the bomb. Khushi contacts Rocky and shares the information with him, but Rocky does not believe her.

After some time Rocky set Khushi free, and Khushi tells him about the bomb. They both rush to save Honey.

In the auditorium, Kabir is about to press the button. Khushi and Rocky arrive in the nick of time and asks everyone to leave this place as there is a bomb.

Later on, Khushi and Rocky fight with Kabir and Meenu for the remote. Police arrest Kabir and Meenu. Rocky and Khushi come to know that the bomb is implanted in Honey's body. A doctor tries to take that out.

Meanwhile, Jyoti informs Mr. Kumar that Kabir and Meenu try to explode a bomb in the school, but Rocky and Khushi saved the Home Minister.

© Copyright tellybest.com, 2020, 2021. All Rights Reserved. Unauthorized use and/or duplication of any material from tellybest.com without written permission is strictly prohibited.
Cached Saved on: Monday 6th of December 2021 05:58:08 PM