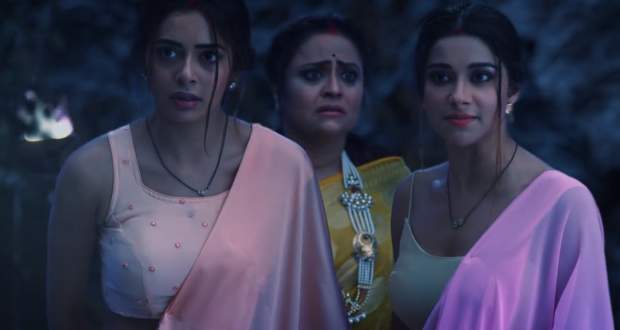 Today's Divya Drishti 10 Aug episode starts with Chetan asking Divya and Drishti how they can use powers in the absence of gemstone. He gets an electrifying shock and Divya uses her powers to cure him.

Later, Drishti and Rakshit share some romantic moments. He helps her wear a saree in an intimate way.

Meanwhile, Shikhar and Divya argue about their relationship. Divya keeps on asking questions about his motives for leaving Pishachini.

In the hall, they all discuss Shachini combining the three gems and Divya and Drishti losing their powers.

They ask from the Rahasya Tara about Pishachini’s plan of action. They get the information that Pishachini is still waiting for a signal to combine the three stones.

At the same time, Pisachini calls Kaal Devta to seek help. Kaal Devta provides a puzzle and Bichu to help her in her mission. He tells her it’s the first test she has to pass to get the powers of gems.

Divya, Drishti, and others forcefully enter Pishachini’s place of hiding and find no one but the burnt ashes of a message. The message joins again and Drishti reads it.

They all try to deduce the message and Mahima says it’s her father’s temple where an Akhand Jyot is present. Only a Suhagan can carry that Jyot (fire) in her hand.

Pischanini listens to everything and decides to take advantage of their deduction. Mahima, Divya, and Drishti decide to go to the temple alone. Meanwhile, Kaal Devta creates a Damru to spread its magic on everyone.

Divya, Drishti, and Mahima search for the temple. Mahima gets hurt but Divya and Drishti refuse to leave her alone in the Jungle. Drishti uses her powers to see a huge monkey-like animal and gets scared. They all reach the temple gate and find it closed.

Pishachini also arrives there and tries to stop them. At the same time, a guard comes and takes the Tatv gem from Pishachini. The guard opens the door and informs that one life has to be sacrificed in order to get inside the temple.