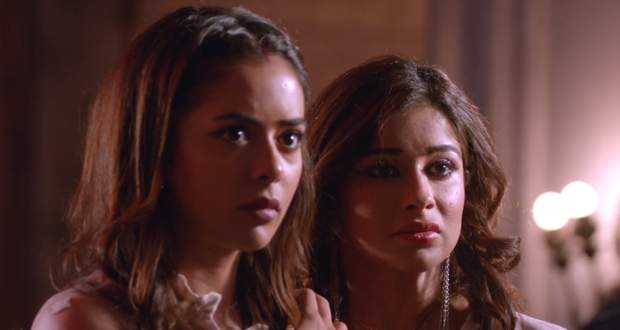 Today's Divya Drishti 10 Nov episode starts with Kaal Devta asking Pishachini about not taking his help in carrying out such a tricky task. He further doesn’t want Divya to be proven innocent.

In the morning, Drishti doubts Shikhar when he goes missing. Shikhar arrives from the temple and gives a Lord Shiva thread to Divya.

Divya and her lawyer are asked to come to Devdi for the court hearing. Shikhar agrees to give a statement but later gets worried because of Kaal Devta.

Shikhar does acting of falling down the stairs and gets hurt. Meanwhile, in the court, Pishachini shows a fake clip of Divya killing Patali.

Drishti uses Divya’s memory to show the clip of Pishachini killing Patali. Later, Pishachini checks the fingerprints of Divya on the knife.

Shikhar acts of caring for Divya and going to give his statement. At the same time, Kaal Devta gives five hours to Divya and Drishti for bringing their witness.

Shergills wonder how Patali’s body can give a statement. Drishti suggests stealing Patali’s body. Meanwhile, Shikhar tells Pishachini that he will do anything to get saved from hell.

Shikhar offers to steal Patali’s body to save Divya. Later, Kaal Devta creates a magical spell across Patali’s body which only prisoner number 401 can break.