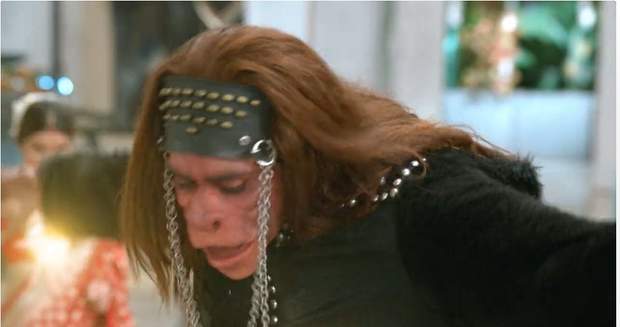 Today's Divya Drishti 11 Aug episode starts with Divya and Mahima stopping Drishti from entering the cave. Pishachini throws Bichhu in the cave and takes away the gem.

Drishti gets suspicious on seeing the glimpse of an animal around. Rakshit waits for Drishti, Divya, and Mahima anxiously.

A creature enters Shergill house secretly. The sound of Damru plays in the background. Drishti, Divya, and Mahima hear a strange noise at Shergill house.

A strange creature roams about in the house. Drishti and others fail to see it.

Rakshit teases Drishti when he learns that she has kept Teej fast for him. Drishti says she has kept the fast for Mahima’s happiness.

The entire Shergill house is decorated for Teej puja. Ojasavi tells Divya that Shikhar has done the beautiful decorations to please her.

Pishachini, on the other hand, craves to solve the second mystery to catch hold of her second gem.

The family members get shocked to find banana peels spread in the house. Drishti, Mahima, and Romi see the glimpse of an animal in the house.

Divya and others chalk out a plan to trap the animal. Drishti gets worried. Rakshit convinces Drishti to utilize her powers intelligently.

The family members get shocked to see the monkey man in the house. The creature attacks Aish and Simran. Rakshit and Divya counter him with their powers.

Drishti gets the glimpse of her falling down from the terrace. She fails to recognize the place. Meanwhile, Pishachini gets the second clue.

Rakshit and Drishti come to deodi to find some clue against Pishachini. The monkey man watches them. Drishti and Rakshit see two feathers on the floor. As soon as Drishti touches them the feathers vanish.

Drishti learns about the place where she could find her second clue.

The monkey man comes to Shergill house. Divya stops him. Rakshit and Drishti leave to get the second clue.