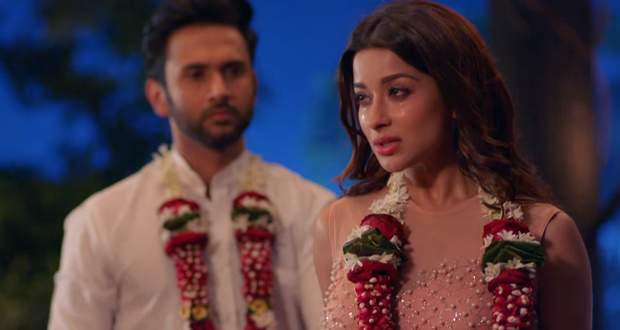 Today's Divya Drishti 11 Jan episode starts with Shikhar trying to talk to Divya. Divya ignores Shikhar while Shikhar accuses both the sisters of having their own imaginative world.

Divya realises something and continues to ignore Shikhar. Meanwhile, Drishti tries to console Rakshit while he accuses her of fighting with him.

They continue to have a cute banter while Divya hears Pishachini revealing about the fake full moon night. She later learns that the blue moon night is on the same day.

Rakshit and Drishti share some romantic moments and a red Potli falls off the cupboard. The red cloth contains some books and drawings which belong to Mahima’s father.

Mahima says she will burn everything while Drishti hides some of the drawings. Meanwhile, Pishachini asks Shikhar to do as she says.

Drishti learns from the drawings that one has to die to open the door of the cave. Drishti decides to sacrifice her life and wants to spend every moment with Rakshit.

She declares she loves him and both spend romantic moments together. Meanwhile, Divya asks Shikhar to help her while Pishachini has threatened to send him in hell.

Divya and Shikhar are at the temple while Drishti also wishes to reach there. Drishti finds Divya getting married to Shikhar and tries to stop them but Rakshit doesn’t want her to interfere.

Divya, Drishti, Rakshit, and Shikhar open the door of the cave. Shikhar doesn’t want Divya and Drishti to go inside as Pishachini asked him to take them inside.

Upcoming Divya Drishti episode update: Pishachini and Laal Chakor have made a plan to kill Divya and Drishti.