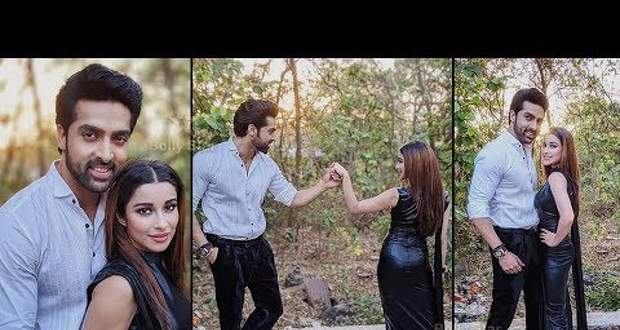 Today's Divya Drishti 11 May episode starts with Divya getting tensed about hiding the light from the Star stone. Romi uses his powers to cover the room.

Chiranjeev’s glimpse appears from the star stone. He states that he fears that their reunion is not favorable for them.

Chiranjeev tells them about Pishachini and Vidya. Meanwhile, Pishachini searches for Divya and Drishti everywhere. He tells them that Pishachini is after the third gem which is with them.

He advises them to beware during the Poornima night. Chiranjeev vanishes. Shikhar comes to the room. They enact to be normal in front of them.

Sunny enact weird in front of the family members. Divya gets suspicious on seeing Sunny behaving like Preeto. Romi decides to follow him.

Rakshit comes to Drishti and inquires about the past incident. Drishti states to him that she is having some mental issues and sometimes hallucinate incidents.

Rakshit refuses to trust her and says that he feels that she is completely fine.

Romi follows Sunny in his car. Sunny comes out of his car and starts walking in the jungle. Suddenly, Romi sees that Sunny’s body vanishes.

Shikhar comes to Divya and Drishti to offer his help. He tells him that he is aware that they are sisters. They ask him not to get into their matter.

Shikhar tells them about Pishachini. He states that Pishachini kidnapped Shikhar in his childhood and then introduced him as Shikhar to Shergill family. Drishti agrees to trust Shikhar.

Shikhar tells Pishachini that Divya and Drishti are planning to kill her tonight. He tells her that he enacted to be their well-wisher.

Rakshit inquires about Pishachini from Drishti. Divya comes and asks Drishti to come along with her. Pishachini organizes a get-together.