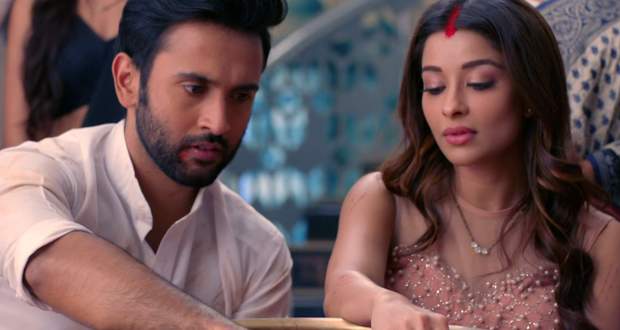 Today's Divya Drishti 12 Jan episode starts with Drishti asking for a weapon from Rakshit to kill Shikhar. Rakshit also warns Shikhar to move out of their way.

Shikhar refuses to move while Pishachini is waiting for them to enter. She starts playing a musical instrument and Drishti recognizes the sound.

A red-feathered cyclone surrounds them and Shikhar goes missing. Shikhar meets them and wants them to not go inside. Drishti thinks that Shikhar should be the one to sacrifice his life.

Meanwhile, Laal Chakor attacks Pishachini for not being able to control her pawn. Later, Divya consoles Rakshit and Drishti in believing that it is a trap of Pishachini.

They are about to leave when Divya is attacked by Laal Chakor. Rakshit saves Divya but a lot of paws of the bird surround them. They fight all the paws and escape the place.

Laal Chakor asks Pishachini to bring Divya and Drishti before the night ends. Later, Aish gets happy about Divya and Shikhar’s marriage and start the wedding rituals.

Mahima gets upset with Divya, Drishti, and Rakshit for going near the cave. At the same time, Drishti gets unconscious and falls on the bed.

Drishti sees something scary in her vision and again gets unconscious. The family members think that Drishti is pregnant while Rakshit gets confused.

Drishti wonders how she can see that her mother died again in the cave by Laal Chakor’s attack. Pishachini also learns that Drishti is pregnant.

Upcoming Divya Drishti episode update: Divya and Drishti learn that Pishachini is planning to change the past.

© Copyright tellybest.com, 2018 & 2019. All Rights Reserved. Unauthorized use and/or duplication of this material without written permission from tellybest.com is strictly prohibited.
Cached Saved on: Monday 6th of April 2020 08:37:22 PM