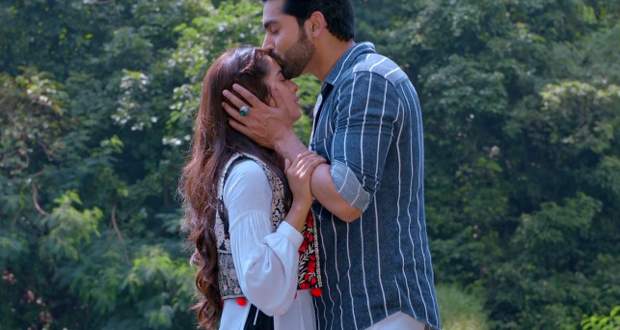 Today's Divya Drishti 12 Oct episode starts with Rakshit coming in the kitchen to meet his mother. Pishachini interrupts them and Mahima leaves to give her herbal oil.

Drishti starts searching for Rakshit while he gets angry at Pishachini and wants to kill her. At the same time, Drishti comes and stops his attack.

Later, the family members get delighted to reunite with Rakshit. Drishti wants them to use proper planning before attacking.

Meanwhile, Kaal Devta tells Pishachini that after midnight will be the best time to kill Divya and Drishti as their powers will be very weak.

Drishti and Rakshit also reunite later near the lake and share some romantic moments. Drishti gets unconscious and the same happens to Divya.

Both of them remember their mother’s words who said their powers will become weak on their 25th birthday and anybody can kill them.

Divya and Drishti make a plan to keep Pishachini and Patali busy for the whole night to that they can’t attack them.

Rakshit asks everyone to play a game to keep Patali and Pishachini busy. Romi discovers Patali is not having a heart. They start playing cricket while Divya and Drishti get weak.

Patali and Pishachini torture the family members while Rakshit and Drishti find a secret room where Patali’s heart is kept. They hang by the door and see many guards in the room.