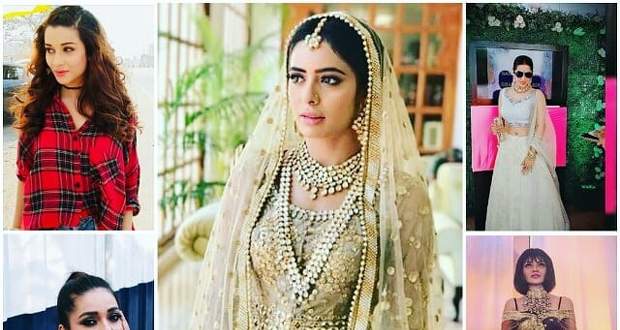 Today's Divya Drishti 13 Jul episode starts with Drishti facing a dilemma concerning the Kaal Vijay gem. Pishachini comes and asks her to hand over the gem to her.

Drishti says if she will walk away from Shergill’s life, then she will give the Kaal Vijay gem to her.

Shikhar comes to Lavanya. He says Divya will bring the gem and he will bring Chetan back to life to become the favorite son of the family.

Lavanya advises him to get the Kaal Vijay gem to her and she will help him in return. She also says that she is very powerful. Pishachini overhears all this.

Drishti and Romi try to step out of Shergill house but Divya stops them with her powers. Drishti throws dhatura on Divya and runs away.

Divya runs after her and struggles to stop Drishti from taking Kaal Vijay gem from the temple. The two sisters fight off with each other.

Pishachini comes there and throws Drishti and Divya apart. She approaches the Shiv Ling to get the powerful gem.

Pishachini searches for the gem around but fails to find it. She fumes in anger. Divya reveals that all this was their plan to trap Pishachini. She attacks Pishachini with her powers.

With the help of the rahasya tara, Divya and Drishti show Pishachini that the Kaal Vijay gem is with Rakshit. They mock at Pishachini.

Rakshit brings Chetan back to life with the help of the gem. All the family members get delighted to see him alive.

Pishachini throws a huge dhatura on Divya but Drishti takes the attack on her. The dhatura hits Drishti’s third eye and she falls flat on the ground. Pishachini also falls powerless. Later, she loses her powers.

Rakshit rescues Drishti back to home. He urges Drishti to get well soon for his sake.

Drishti gains conscious but she fails to see anything. She starts crying but Rakshit consoles her. Lavanya hides the gem in a candy box.

Pishachini tells Lavanya that if Rakshit will eat the gem then he will die.