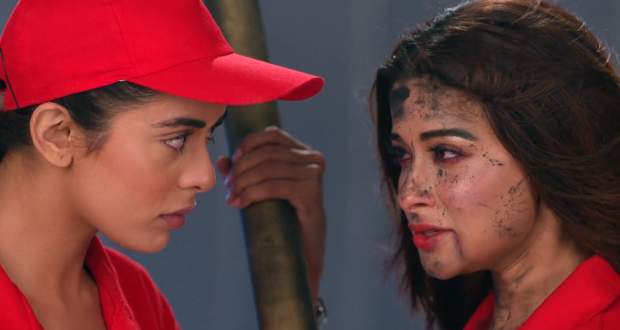 Today's Divya Drishti 13 Oct episode starts with Pishachini searching for Rakshit and listening to some voices. Rakshit uses his powers to come out but Drishti is still in the room.

Rakshit finds his aunt in trouble but is unable to use his powers. At the same time, Drishti arrives and saves Chachi.

Drishti stalls Patali and Pishachini while Rakshit asks Divya to destroy Patali’s heart in her room. Meanwhile, Divya reaches the hell and is attacked by guards from all sides.

Divya fights the guards while Rakshit helps Drishti winning. Divya comes out with Patali’s heart and tries to destroy it along with Drishti.

Later, the heart disappears and everybody gets unconscious. Meanwhile, Patali is dying without her heart while Kaal Devta tells Pishachini she has to kill Divya and Drishti as soon as possible.

Drishti sees that she will kill Rakshit in the future. Pishachini tells Divya and Drishti that someone in the house is having Patali’s heart inside their bodies.

She further says if Patali dies than the person with her heart will also die. Later, Drishti discovers that Rakshit is having Patali’s heart inside his body.

Rakshit takes Drishti to an isolated place and asks about her vision. He requests Drishti to kill him so that Patali can be destroyed.

Drishti puts a knife in Rakshit’s chest but the knife is fake. At the same time, Pishachini also learns that Rakshit is having Patali’s heart.

Drishti makes a deal with Pishachini and asks to save Rakshit. Pishachini takes Rakhit to remove the heart.

Upcoming Divya Drishti episode update: Patali gets her heart back while later Divya and Drishti perform a dance.