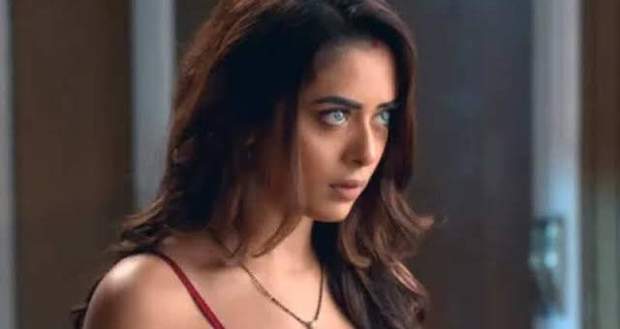 Today's Divya Drishti 14 Dec episode starts with Divya asking Shikhar if he will get happy with her getting married. They both get into an argument while Divya wears the wedding outfit in front of him.

She gives him one chance to say anything before she agrees to get married to Vicky. Shikhar gets scared to think that Divya will get married to anyone else.

He rushes to stop Divya but gets distracted by footprints. He deduces that an animal has turned into human. He finds Vicky at the end of footprints.

Shikhar finds dog hairs while later Divya says yes for the marriage. Drishti deduces that the third hand is of Rakshit in the cave.

Pishachini asks Vicky to attack Shikhar first. Later, Shikhar wishes to talk to Rakshit about the footprints but is interrupted by Mahima.

Drishti thinks about the connection between cave and fifth person while she hears the voice of an animal. She finds the wolf man who starts following her.

She gets attacked by the creature but uses her powers to fight him. She later finds Shikhar in an injured condition and gets suspicious of him.

Later, Drishti finds the paper with Shikhar’s photo and prisoner escaped from hell written on it. She loses the paper and tells Rakshit that Shikhar is not real.

Drishti wants him to open the locker along with Shikhar to prove the truth. Later, Rakshit and Shikhar scan the locker.

Upcoming Divya Drishti episode update: Drishti proves that Shikhar has escaped from prison and is Lombda.

© Copyright tellybest.com, 2018 & 2019. All Rights Reserved. Unauthorized use and/or duplication of this material without written permission from tellybest.com is strictly prohibited.
Cached Saved on: Monday 30th of March 2020 03:05:24 AM