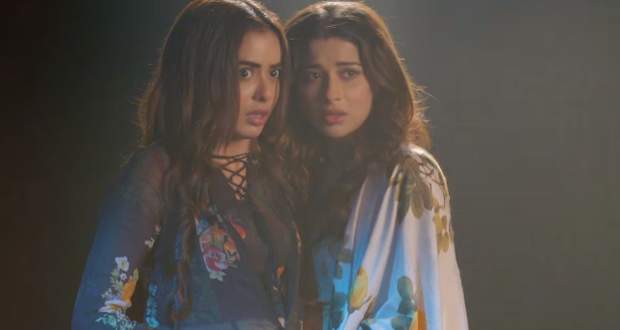 Today's Divya Drishti 15 Feb episode starts with the Shergills waking up as someone arrives on the door. Mahima calls Rakshit to open the door and he finds a box.

The box contains two dolls while Ojaswani says that they belong to Pishachini. Mahima gets suspicious of Pishachini while Pishachini says Shergills are playing some game.

Mahima is mad at Pishachini while Romy asks Divya and Drishti to stay alert. Later, Drishti sees Guruji and her mother in her dream.

She wakes up to get some water but is caught by Mahima. Divya, Rakshit, and Shikhar also wake up and come out while Mahima surrounds Drishti by furniture.

Mahima is about to attack her when Drishti and Divya disappear. They reach a dark place where they find Guruji. Guruji asks them if Mahima has seen Drishti’s pregnant stomach.

He then transforms into a ball of fire and reaches in front of Mahima. The ball changes into Divya and Drishti who warn them that Drishti’s kids will soon come to destroy them.

Guruji wishes to meet Rakshit while he gets shocked to see his grandfather. He reveals that he was trapped in the cave for 25 years and escaped when the cave broke down.

Guruji suggests that they have to create differences between Mahima and Pishachini so that they can destroy each other. He wants to kill Mahima as well as she is evil.

Later, Romy makes a painting of Divya and starts calling Pishachini. He blames her for killing Divya and declares his love for her. It is Guruji’s plan to break Pishachini’s pride.

Divya also turns her hair white while Drishti gets trapped in a room because of Mahima. Later, Pishachini turns against Mahima.

Upcoming Divya Drishti episode update: Drishti gives birth to her kids while Guruji comes in the room to meet them.

© Copyright tellybest.com, 2018 & 2019. All Rights Reserved. Unauthorized use and/or duplication of this material without written permission from tellybest.com is strictly prohibited.
Cached Saved on: Monday 17th of February 2020 07:30:57 PMCached Disp on: Friday 21st of February 2020 12:08:13 PM