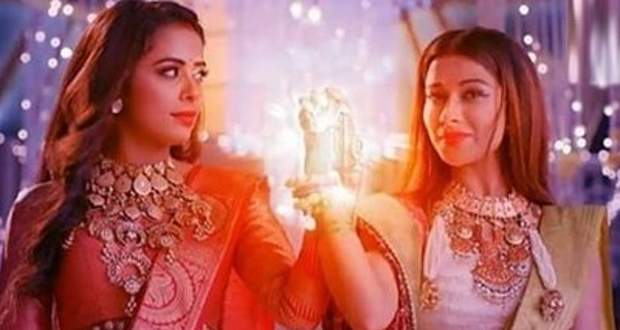 Today's Divya Drishti 16 Jun episode starts with Drishti and Divya trying to calm down Simran. They inquire about the black coconut from Simran. Drishti says we can use Pishachini’s locket to get the clue.

Drishti says we will replace Pishachini’s necklace with a fake one to trick her. Divya tries hard to console Drishti as she is upset with Rakshit and Lavanya’s wedding.

Pishachini gets excited when Anjaan tells him that Rakshit is ready to get married to Lavanya. She adds that she will do something bog tonight.

Anjaan brings Drishti to the storeroom. Drishti vents out her frustration on Anjaan. She says she is least affected by Rakshit’s wedding.

Divya comes to Simran disguised as Pishachini and tries to collect information about the black coconut from her. Simran gets petrified.

Divya walks away as Mahima comes to Simran’s room. Simran takes the name of the bridge. Divya and Shikhar decide to go to the bridge.

Romi follows Anjaan to the jungle. He sees Anjaan unmasking his face. Rakshit senses Romi's presence and throttles him. Romi gets shocked to see Rakshit as Anjaan.

Romi questions him about his reason for supporting Pishachini. Rakshit says he is enacting to support Pishachini to find his father.

Divya and Shikhar come to Deodi to replace the gems necklace. They find the necklace but fail to replace it as Drishti comes and takes them away.

Drishti bumps into Pishachini. Pishachini takes away her mangalsutra. Drishti pleads in front of Pishachini not to ruin her wedding.