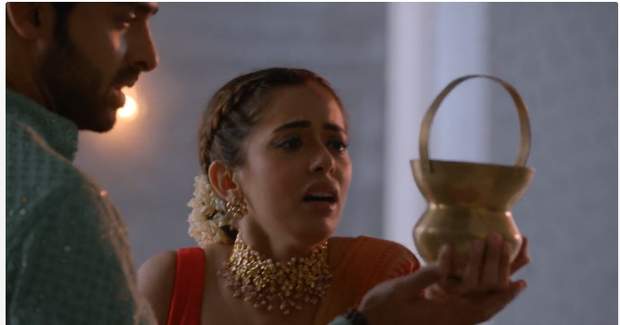 Today's Divya Drishti 17 Aug episode starts with Pishachini conversing with Vetaal. Vetaal stops Pishachini from going inside because she doesn’t have a companion.

Drishti comes there along with Rakshit and requests Vetaal to let her go inside. Vetaal agrees as she has a companion.

Monkey man attacks Shergill family members. The creature throttles Rashi but Chetan comes and hits him hard on his head.

Divya and others trap Monkey man inside a sac. They lock him in the storeroom.

Vetaal gives a kamandal to Drishti which will help her in achieving the second mission. Rakshit disappears from sight.

Vetaal produces three replicas of Rakshit in front of Drishti and asks her to identify her original husband. He even tells her that if she will choose the wrong person, Rakshit will die.

Divya and Chetan get shocked to find Shikhar locked inside the cupboard. The family members tell him about the monkey man.

Shikhar says he was locked in the cupboard by someone. They doubt Romi behind all the chaos.

Drishti decides to jump off from the terrace only with an intention to find real Rakshit. Rakshit comes and stops Drishti from falling.

All the family members accuse Romi of being the monkey man. Drishti and Rakshit return to Shergill house.

Divya plays damru to call Shikhar back in the house. Shikhar requests everyone to save him from becoming the monkey man.

Some time back: Shikhar comes in his real avatar in front of Pishachini. He tells her that he became monkey man only for the sake of the powers.

Shikhar adds that he is faking love to Divya to fulfill his secret motive. Shikhar helps Pishachini in catching hold of the real kamandal.

Present: Pishachini brags about her success in front of Kaal Devta. She enlightens the powers of her gem.