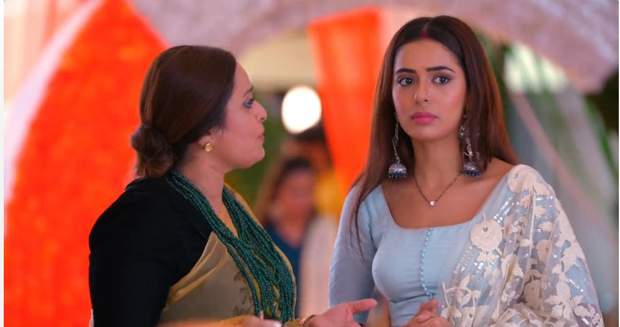 Today's Divya Drishti 18 Aug episode starts with Rakshit using his powers to control Shikhar. Drishti tells them that Pishachini has replaced the real kamandal and duped them.

Drishti gets panicky realizing that Pishachini has enlightened the powers of the second gem as well. Divya breaks down in tears as she loses her powers.

Romi consoles Divya with his words. Divya feels bad thinking about Shikhar turning into monkey man. Meanwhile, Drishti blames herself for everything.

Drishti and Rakshit get into an argument when the lady decided to fight Pishachini all alone. Rakshit says he has promised himself not to leave her alone.

Rakshit says he cannot live without her and so he will not let her face the threat alone. The two get cozy while staring each other.

Shikhar comes to deodi to meet Pishachini. She asks him to enact as a victim in front of Shergill family members so that they can reveal all their secrets to him.

Shikhar calls out Divya for help. All the family members rush towards Shikhar’s room and try to control him. Divya plugs cotton in his ears to stop him from reacting to the tune of the damru.

Drishti gets a glimpse of a fire breakout. She gets worried on seeing all this.

The Shergill family members gear up to celebrate the occasion of Rakshabandhan with Rakshit and Shikhar.

Rakshit puts Shikhar and Romi in handcuff so that he can stop Shikhar from being influenced by Pishachini.

The family members gather to celebrate the occasion of Independence Day. Pishachini plants bomb in the building.

Drishti and Divya tie rakhi’s on each other to celebrate their sisterhood. They promise to stay together always.

© Copyright tellybest.com, 2018 & 2019. All Rights Reserved. Unauthorized use and/or duplication of this material without written permission from tellybest.com is strictly prohibited.
Cached Saved on: Tuesday 14th of July 2020 03:16:05 PM