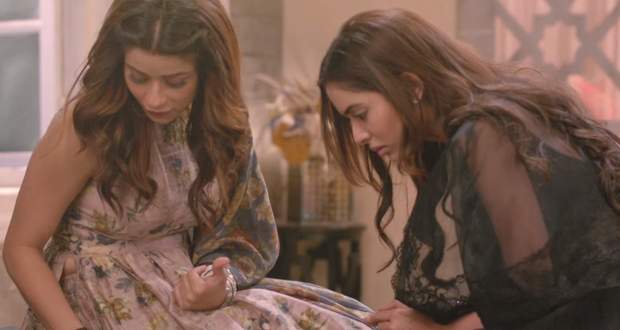 Today's Divya Drishti 18 Jan episode starts with Rakshit taking care of Drishti’s injuries. He tells her in her sleep that the test is negative and wants her to share if anything happens.

Drishti tells Divya that she saw a vision and lied about feeling dizzy. She tries to tell something to Divya but Mahima asks both of them to go in their room.

Divya and Drishti realize that Laal Chakor wants to change the past and avoid their birth. Drishti goes to the cave and Divya follows her.

Drishti wishes to enter the cave and finds the feather of Laal Chakor. She starts singing to the same sound and the feather directs her to a path.

Drishti enters the cave through the magical box while Divya follows her. They see the past in the cave and talk to their mother. They successfully save their mother but are unable to see Laal Chakor’s face.

The cave starts breaking and Drishti pushes Divya out of the cave. However, Divya returns and saves Drishti. Drishti also finds a sea shell but they are unable to open it.

Laal Chakor and Pishachini plan to kill the sisters. Meanwhile, Mahima and Rakshit get mad at Drishti for again hiding the truth and going to the cave.

Aish organizes a party for Divya and Shikhar and invites Rakshit’s cousins. During the party, Rakshit makes a protection wall around the house. Divya sees the seashell glowing while Drishti hears the voice of a kid.

Upcoming Divya Drishti episode update: Drishti learns she is pregnant and learns that Laal Chakor belongs to their family.

© Copyright tellybest.com, 2018 & 2019. All Rights Reserved. Unauthorized use and/or duplication of this material without written permission from tellybest.com is strictly prohibited.
Cached Saved on: Sunday 5th of April 2020 01:51:33 AM