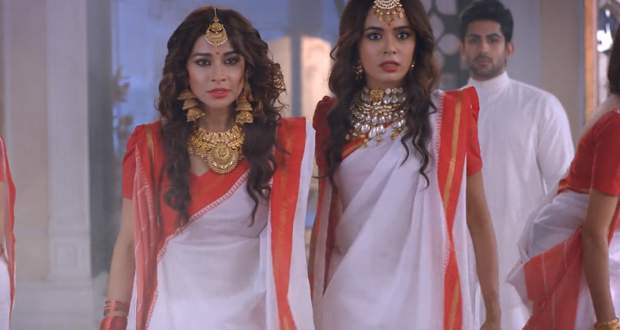 Pishachini takes out Patali’s heart and Patali gets powerful again. She attacks Divya and Drishti and traps them in a string.

They are brought in the hall where a lot of Bengali dancers also arrive. Patali and Pishachini are distracted by the smoke while later Divya and Drishti arrive all dressed up.

Patali is about to attack Divya and Drishti when Rakshit arrives to save them. After a lot of struggle, the Divya, Drishti, and Shergills escape on a big feather.

Patali and Pishachini continue to fight and later Pishachini says she has a secret reporter among the Shergills. Meanwhile, Rakshit tells the plan to everyone and all of them go on their separate ways.

Pishachini uses magic to find the location of her reporter and other Shergills. The ball of magic reaches Ojaswani and Pishachini is able to locate her location.

Kaal Devta asks his most powerful prisoner to punish the army of hell. At the same time, Romi takes the Shergills to the same place as Divya, Drishti, and Rakshit.

Patali sets the bus on fire while Pishachini starts searching for the sisters. Romi and others learn that Ojaswani is the reporter of Pishachini.

Upcoming Divya Drishti episode update: Divya and Drishti ride on the same bus to stall time while Patali is on the bus to kill them.