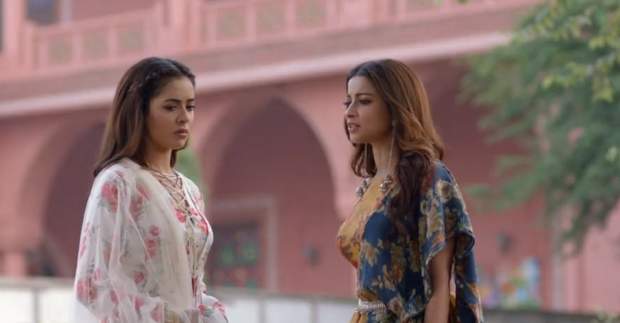 Today's Divya Drishti 1 Dec episode starts with Divya and Drishti creating a light Chakra to stop the bikers. Meanwhile, the bikers seek blessings from their Guru to defeat the dead people.

Rakshit and Shikhar are taken to the village for the surprise by the dead kid. Meanwhile, Divya and Drishti try to burn the bikes but fail. They also see Trishul signs on them.

Rakshit and Shikhar successfully convince the villagers in believing they will kill the bikers but Divya and Drishti flop their plan by revealing they can’t kill them.

The villagers decide to attack Shergills and they can’t even use their powers. The village gets dark and the dead villagers get more powerful.

The Shergills put the ashes in the well while bikers distract the villagers. All villagers disappear while they later return to Shergill house.

Shikhar is about to tell Divya something when Drishti interrupts. Drishti wants Divya to not get too close to Shikhar while Shikhar remembers the rhyme sang by Rakshit.

He also remembers some scenes from his childhood with Aish and Mahima. Later, Divya and Drishti learn from Rahasya Tara that they need to learn something from the past.

Shikhar continues to search for a painting while later Rakshit’s friend, Vicky arrives at Shergill house.

Upcoming Divya Drishti episode update: Divya finds a diary and she enters the book along with Drishti.