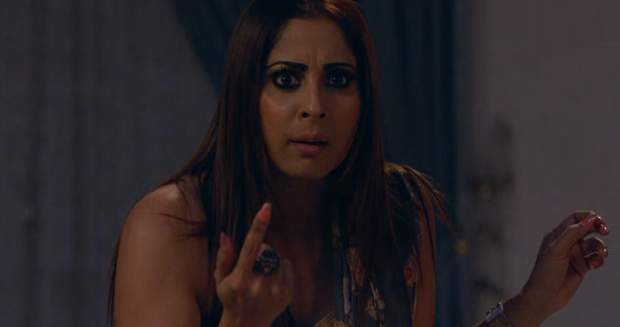 Today's Divya Drishti 1 Feb episode starts with Sweety trying to escape the Shergill house. However, Lal Chakor attacks her and kills her. Rakshit, Drishti, and Divya try to fight him.

Rakshit traps him in a net and decides to expose him. Pishachini saves Lal Chakor while Lal Chakor kills Ojas Chachi. Later, Pishachini asks for her eyes back.

Rakshit spends some emotional moments with the remaining family members. Romi learns that he is going to be an uncle and leaves to get something from the kitchen.

Drishti finds the treasure box and says that they can escape through the box. At the same time, Lal Chakor arrives and Shergills hide.

Everybody else tries to escape while Shikhar is attacked by Lal Chakor. Divya and Drishti save Romi and Shikhar and try to escape through the treasure box.

Romi saves others and himself gets trapped in the house. He also gets shocked to see the face of Lal Chakor. Meanwhile, Divya, Drishti, Rakshit, and Shikhar reach a Shiv temple.

Romi chooses to die rather than supporting Lal Chakor and Pishachini. He is killed by Lal Chakor while later, Pishachini gets her eyes back.

Drishti and Divya make a plan to find out about Lal Chakor. Divya decides to go to execute their plan alone. Divya comes out of the box while Pishachini creates a magic dome around it.

Drishti sees a vision in which Divya is in danger. Meanwhile, Divya spills oil in the kitchen and creates magic as per her plan. At the same time, Pishachini finds one body missing from the dead.