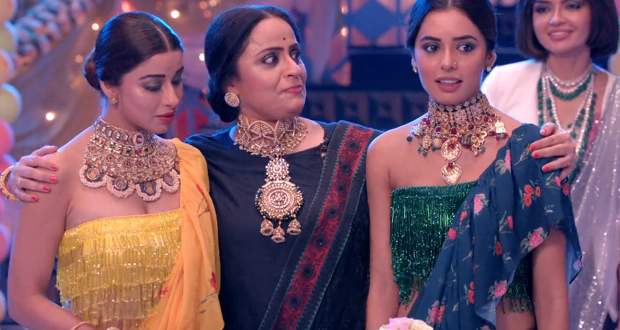 Today's Divya Drishti 20 Oct episode starts with Ojaswani explaining how she got trapped in Pishachini’s trap. At the same time, Divya, Drishti, Rakshit and Mahima arrive on the bus.

The prisoner in hell uses the red stone to get released from the traps of Kaal Devta. Meanwhile, everybody gets scared to see Patali near the windows.

Drishti does magic on windows to stop Patali. Patali removes the top of the bus while Divya stops the bus and everyone gets out.

Patali traps Divya, Drishti, and Rakshit on the bus and attacks the others. Divya and Drishti get off the bus while others say they don’t get scared of her by looking in her eyes.

The sun rises and Patali disappears. Later, Divya feels weird and sees someone with long hair calling her name. She gets unconscious and feels disturbed after waking up.

Later, everybody starts preparing for Divya and Drishti’s birthday while the prisoner that escaped from hell meets Divya in her sleep.

Patali and Pishachini also arrive at the party and keep the dandiya sticks. They set a competition that whoever leaves the dandiya first has to leave the house.

The dandiya gets wet and is unable to burn Divya and Drishti’s hands.