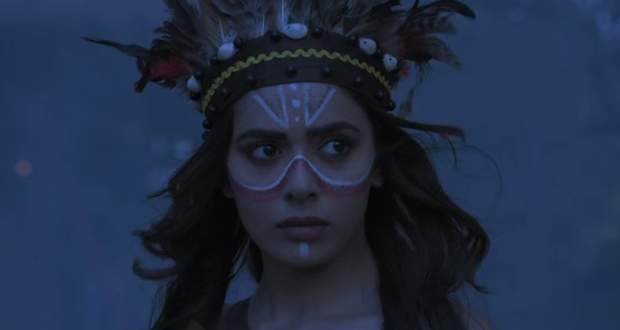 Divya imagines Shikhar dressed as the groom but the realization hits her hard. Drishti wishes to do the Kanyadaan and warns Divya of the upcoming danger.

Drishti uses her magic to create smoke so that they open the window and moonlight come in. Drishti further uses the silver Tazweez to trouble Pret Lombda and later exposes Vicky.

Vicky turns into a Pret Lombda and takes Divya along with him. Meanwhile, Shikhar asks Ashlesha to open him so that he can save Divya.

Divya and Drishti try to fight Lombda along with Rakshit but fail. At the same time, Shikhar arrives to save Divya from him.

Pishachini creates a replica of Pret Lombda to control the real Lombda. Rakshit tries to find out from Vicky who sent him but Pishachini controls him to not reveal anything.

Vicky tells them about Laal Chakor but is not able to explain as Pishachini kills him. Later, Rakshit accidentally reaches a tribal area where he is trapped by the people.

The tribal people force Rakshit to marry one of the girls while he calls out for help from Drishti. Drishti reaches the area and learns they are getting him married.

Drishti dresses like a tribal woman to save her husband. She tries to open Rakshit’s ropes but the head of the tribe recognizes her as not being their own.