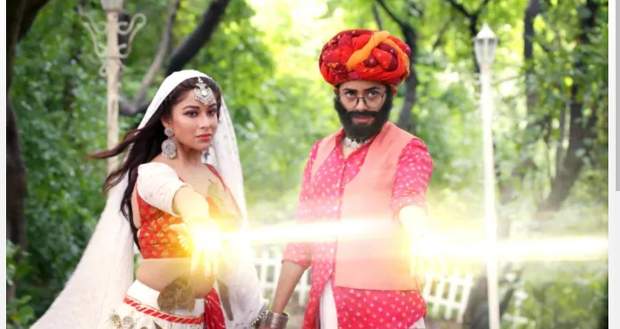 Today's Divya Drishti 21 Sep episode starts with Pishachini enacting in front of Rakshit as a victim.

Mahima stops Drishti from questioning Rakshit. Pishachini mocks at Drishti on the failure of her marriage. She says they can never defeat her.

Pishachini lashes out at Raingini for not being able to identify Drishti and Divya. She attacks Raingini but Kaal devta separates them.

Kaal devta advises Pishachini to get pregnant with Rakshit’s child as this is the only way left to get the superpowers. Drishti, Divya, and Romi try hard to draw inference from Pishachini’s warnings but fail to do so.

Mahima comes and tells them that Pishachini will be able to get Rakshit’s powers only if she bears his child in her womb. Drishti gets panicky and comes to Rakshit’s room.

She requests Rakshit not to stay with Pishachini. Drishti starts crying. Rakshit hugs her. The two share an emotional moment. Pishachini captivates Divya while she comes to find Drishti.

Shergill family members get worried when Pishachini informs them about Drishti and Divya’s kidnapping. All the family members start searching for them.

Pishachini locks Drishti and Divya in a trunk. She spells the trunk in a way that nobody could see the two sisters except Pishachini herself.

Mahima realizes that Drishti and Divya are inside the trunk which Pishachini has dumped into the water. Pishachini celebrates her success.

Later, Rakshit inquires about Pishachini from the family members. Pishachini craves for help from Kaal devta who brings her out from the water.

Drishti says we need to find out Pishachini’s savior. Drishti and Divya tell Mahima that they have made a perfect plan to evade Pishachini.

Divya looks for Raingini who hides from her. Drishti deliberately starts a fight with Pishachini. Meanwhile, Mahima takes Rakshit out from the room.

© Copyright tellybest.com, 2018 & 2019. All Rights Reserved. Unauthorized use and/or duplication of this material without written permission from tellybest.com is strictly prohibited.
Cached Saved on: Sunday 9th of August 2020 07:40:30 PM