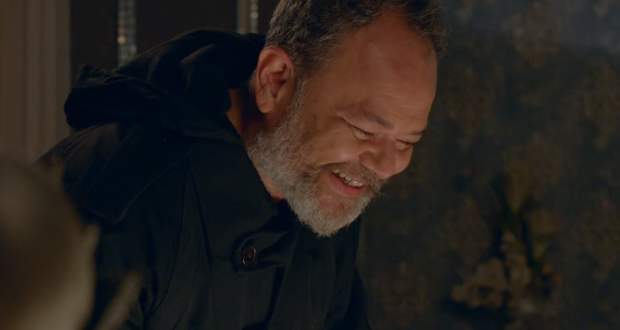 Today's Divya Drishti 22 Feb episode starts with Kaal Devta coming inside the room where Drishti’s kids are present. The Kaal Devta is exposed as Guruji who wants to gain the Kaal Vijay Ratna.

He reveals the story that he had Kaal Vijay Ratna but it was cursed. He wanted some pure soul to remove the curse and so he threw it towards Vidya as he also learned about Mahima and Pishachini’s evil alliance.

He further tells that the Ratna entered Vidya and Divya and Drishti got the powers of that Ratna. Then he planned to kill Kaal Devta and take his place to fool Pishachini.

He wishes to send the kids to hell after gaining the Ratna. Later, Kaal Devta aka Guruji tells Pishachini and Mahima that the kids have already been born.

Pishachini helps Mahima regain her powers using her own powers. Later, Drishti wishes to meet her kids while later they find Mahima taking kids in her arms.

Shikhar and Divya reveal that they found a blood-stained jacket of Guruji in the safe room. Kaal Devta aka Guruji has the kids and wants Pishachini to get the Kaal Vijay Ratna.

Divya and Shikhar start searching for Kaal Devta and use Kaal Vijay Ratna to search for the babies. Meanwhile, Guruji has kept the babies and knows Ratna will arrive.

Divya follows the Kaal Vijay Ratna to reach the babies. Later, Rakshit challenges Laal Chakor to come and fight with him. He approaches to kill Rakshit while Mahima starts doing drama.

Divya and Shikhar reach the hut where Drishti’s babies are kept. Shikhar tries to fight Kaal Devta aka Guruji and is attacked by him. Meanwhile, Mahima traps Rakshit and threatens to kill him.

© Copyright tellybest.com, 2018 & 2019. All Rights Reserved. Unauthorized use and/or duplication of this material without written permission from tellybest.com is strictly prohibited.
Cached Saved on: Tuesday 7th of July 2020 07:44:11 AMCached Disp on: Thursday 9th of July 2020 05:11:41 PM