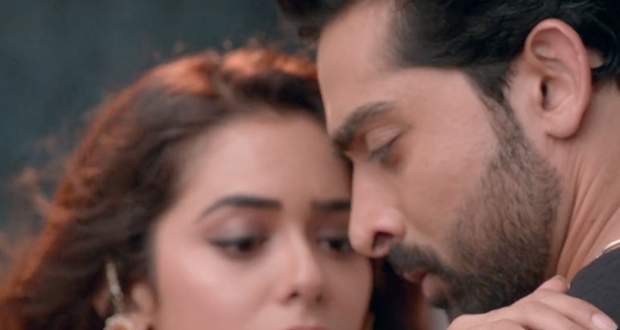 Today's Divya Drishti 22 Sep episode starts with Drishti challenging Pishachini that she will prove that she is only Rakshit’s wife and not Pishachini.

In the meantime, both Drishti & Mahima try to make Rakshit understand Pishachini is not his wife but he is not ready to listen and also not able to remember anything about his past.

Here, Divya catches the Raingini in a bottle but she manages to escape.

Pishachini tries to seduce Rakshit but Drishti takes Pishachini’s avatar and stops it.

Divya uses her power to stop Pishachini and they both get into a fight with each other and Pishachini wins the fight.

Drishti tries to recreate the romance scene with Mr. Shergill which had happened between them a long time ago in the bathroom. Rakshit tries to remember his past but at the same time, Raingini bites Rakshit. Because of this, Rakshit couldn't recollect his past.

Drishti gets angry on Divya & Romi for allowing Raingini to escape.

Meanwhile, in the dining table, Pishachini eats non-veg and everyone leaves the table.

Drishti and Divya see a vision of a mark in someone’s hand and they both knew that something bad is to about to happen.

Drishti knows that it is Rakshit’s hand but doesn’t want to reveal that to Divya.

Upcoming Divya Drishti episode update: Pishachini takes everyone for shopping. Divya suspects that Drishti is hiding something from her.