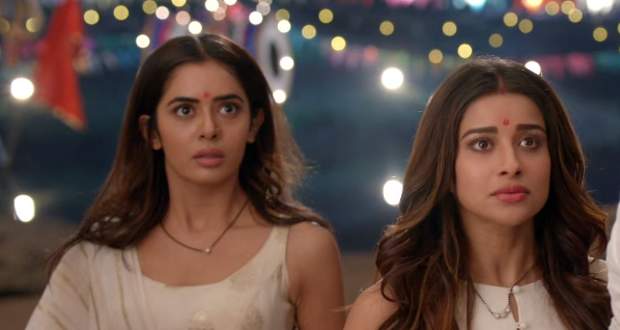 Mahima dies and Pishachini takes the Ratna from her. At the same time, Shikhar and Divya bring Drishti’s babies and they all get happy. Later, they decide to search for Guruji and go to Devdi.

Pishachini is there with Kaal Devta aka Guruji and has two Ratnas. Kaal Devta shows the Kaal Vijay Ratna and later Pishachini puts the Shergills life in danger.

She surrounds them with hellfire and puts Romi, Simran, Ojas, and Mahima inside it. The three Ratnas combine and Pishachini puts the rest of the Shergills including Divya and Drishti inside the fire.

It all turns out to be Drishti’s vision and Divya and Shikhar come with babies. Drishti suggests they should leave the house and later they join the Mahashivratri Pooja.

Later, Pishachini gets shocked to learn that Kaal Devta is Guruji. Meanwhile, Drishti and Divya execute their plan and wish to bring Pishachini and Kaal Devta in the temple.

Divya and Drishti get the temple cleared of people and they perform a dance to invite Shiva. Later, Pishachini arrives and Rakshit asks about Guruji.

Kaal Devta arrives and reveals his true identity. Guruji and Pishachini attack the Shergills while Guruji approaches to kill Drishti’s babies. Rakshit runs after him and kills him using Shiva’s Trishul.

Pishachini takes the Kaal Vijay Ratna and combines the three Ratnas. The Maha Ratna makes Pishachini powerful and bigger. She attacks Shikhar and Rakshit and attempts to kill Divya and Drishti.

Later, Shiva’s third eye opens and destroys Pishachini. The Kaal Vijay Ratna enters the third eye of the Shiva statue and a lot of blasts occur in the area.

© Copyright tellybest.com, 2020, 2021. All Rights Reserved. Unauthorized use and/or duplication of any material from tellybest.com without written permission is strictly prohibited.
Cached Saved on: Monday 6th of December 2021 04:26:31 PM