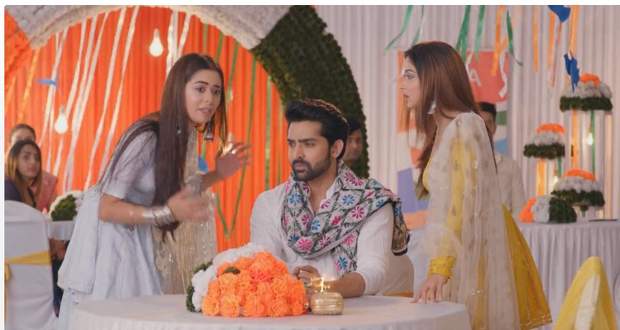 Today's Divya Drishti 24 Aug episode starts with the celebrations of Shergill family members. Pishachini comes disguised as a dancer of the troupe. While dancing, Drishti and Divya recognize Pishachini.

Drishti informs Rakshit about the same. He fails to move because of the magical strands wrapped around his hands by Pishachini.

Vetaal also comes to the party in the disguised avatar of a joker. Drishti and Divya follow him. All the family members get worried on seeing their hands strangled.

Shikhar reveals his true intentions in front of Romi and states that he is on Pishachini’s side. He takes Romi along with him.

Drishti tells Divya that we need to save the lives of the children who are with Vetaal. Vetaal indulges the kids in a game.

Vetaal tells Drishti about a riddle and asks her to solve it before the body parts of the kids vanish. Drishti and Divya get panicky.

Pishachini comes in her real avatar in front of everyone at the event. She mocks at Rakshit for not being able to counter her attack.

Drishti manages to crack the riddle and save the kids. Meanwhile, Rakshit frees himself as well as all the other people from Pishachini’s strands.

Vetaal again confuses Drishti with his riddle in return of the kids’ freedom. Drishti and Divya save the lives of two more kids.

They look for other kids in the building. Also, Rakshit looks out for Shikhar and Romi. Shikhar attacks the people in his monkey man avatar.

Aish tries to stop Shikhar but all her efforts go in vain. Monkey man reveals that he is not the real Shikhar as he was replaced by Pishachini in his childhood.

Shikhar informs them about the implantation of the bomb in the building. Rakshit tells Drishti and Divya about the same.

Drishti and Divya follow Vetaal when they see him along with kids. Pishachini plays damru and calls out for monkey man.

Pishachini asks the monkey man to keep an eye on Drishti and Divya and stop them from failing her plan.