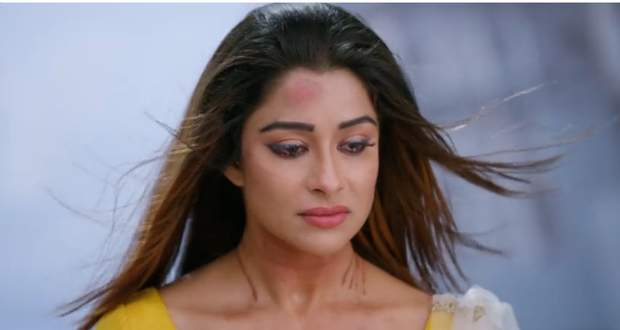 Today's Divya Drishti 25 Aug episode starts with Pishachini handing over the bomb remote to Shikhar. She instructs him to keep a check on Divya’s activities.

Drishti and Divya reach out to Vetaal who gives them their third riddle. Shikhar heads towards Divya along with Romi.

Vetaal puts Drishti and Divya to test through his riddles. They crack the puzzles to save the lives of the kids.

Meanwhile, a small girl catches hold of the bomb remote. She presses the floor 5 button which triggers the bomb. The bomb blasts but Rakshit saves the life of the person stuck in the floor.

Pishachini attacks Vetaal who tells her that Drishti and Divya have got hold of the three elements of the last gem.

Divya asks Drishti to run away and complete the tasks. Shikhar pushes Divya away and reveals that he is an evil man who only craves for powers.

Pishachini and Daitya vanar get into argument while Drishti runs away. Divya stops Shikhar from attacking Drishti.

Pishachini runs after Drishti and catches her hold. She strives to snatch the bag containing elements from Drishti.

Drishti spills the ash inside the bag on the floor. Suddenly, branches start coming out from the ash. Romi reaches out to Rakshit and asks him to help Divya.

Daitya vanar throttles Divya. Rakshit comes and hits him hard. Shikhar holds a child from his tail and threatens Rakshit and Divya to throw the kid from the terrace.

Shikhar throws the kid down. Rakshit jumps after the child and saves him.

Drishti comes to a secret room and finds Lord Shiva’s idol there. She cracks the last hint and gets the flower which will help her in finding the third gem.

Divya and Shikhar indulge in a deadly fight. Shikhar hits Divya hard on her head. Divya stabs Shikhar with a dagger. Divya reveals to Rakshit that she killed Shikhar.