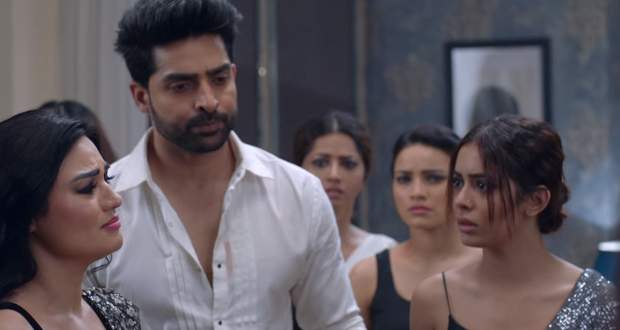 Rakshit is worried about his mother while the doctor declares that Mahima is dead. Rakshit loses his senses and Drishti slaps Rakshit to bring him to reality.

Divya and Drishti want to know where everyone was when Mahima was attacked as they are suspicious of someone amongst them being Laal Chakor.

Aish reveals that she saw Nisha and Ashish in a room while Simmi accuses Ashish of flirting with her. Later, everybody starts interrogating Monty as they get suspicious of his activities.

Ojas and Aish find something shocking on Monty’s phone while Divya and Drishti find Monty in the room where Laal Chakor just entered.

Ojas and Aish reveal that Monty is accused of drink and drive case. Later, Pishachini falls down and loses her eyesight. She has got punishment from Laal Chakor.

They get a message from Lal Chakor who threatens to kill another family member. Later, Rakshit learns that Drishti is pregnant and gets delighted.

Pishachini attacks Simmi while Ashlesha wants Shikhar to check if everything is fine. They hear the same instrumental noise and find Aish dead.

Upcoming Divya Drishti episode update: Rakshit is sure Monty is Lal Chakor while later they find his dead body.

© Copyright tellybest.com, 2018 & 2019. All Rights Reserved. Unauthorized use and/or duplication of this material without written permission from tellybest.com is strictly prohibited.
Cached Saved on: Thursday 30th of January 2020 05:16:29 PMCached Disp on: Friday 21st of February 2020 11:40:52 AM