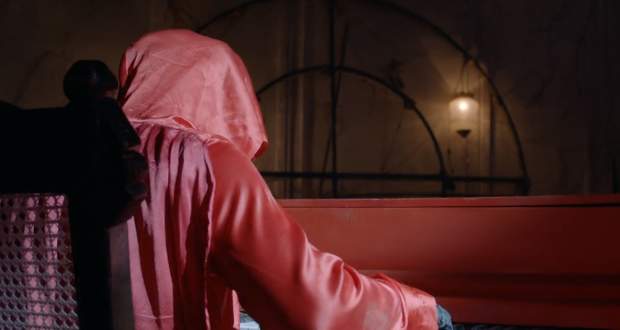 Today's Divya Drishti 26 Jan episode starts with Shergills getting ready to eat food. However, they start hearing the same tune and deduce Laal Chakor is going to kill someone.

They all stick together and check the Devdi. Pishachini is alright while Rakshit decides to leave the house. The Shergills try to break the wall but the wall rebuilds.

Later, Rakshit breaks the wall and Monty’s dead body falls out. They get shocked while Sweety gets really upset. Meanwhile, Pishachini is mad that she can’t see.

Laal Chakor arrives and threatens to take her life if she helps Shergills again. Laal Chakor leaves after attacking Pishachini. Elsewhere, Rakshit wants Drishti to eat something for their kid.

They again get a message from Laal Chakor while Pishachini comes in a red saree. She tries to trouble the Rathods while later the light goes off.

A white light emerges and turns Nisha and Ashish into the wood. Later, Simmi is also attacked by the same light. She also turns into wood and Laal Chakor sends another message.

Drishti sees a vision wherein there is only darkness. Drishti puts her hand on everyone’s head while no one is Laal Chakor. Sweety accuses Drishti of being Laal Chakor.

Pishachini meets Laal Chakor and warns that Divya and Drishti might find out his truth. Later, Shikhar blames himself while Divya treats his wounds.

Later, Sweety wishes to tie Drishti while Divya ties her instead. Pishachini arrives and starts dancing. Later, a wall breaks and Sweety tries to escape but Laal Chakor kills her instead.

© Copyright tellybest.com, 2018 & 2019. All Rights Reserved. Unauthorized use and/or duplication of this material without written permission from tellybest.com is strictly prohibited.
Cached Saved on: Sunday 5th of April 2020 01:59:24 AM