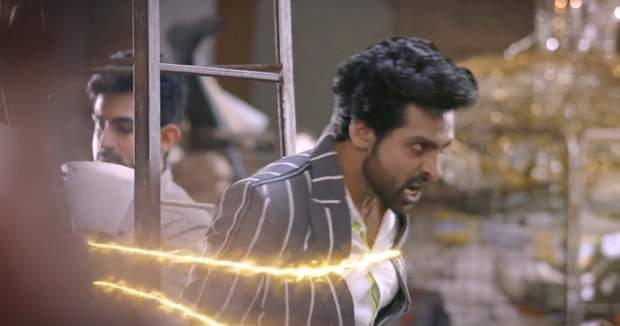 All the family members come to the mall along with Pishachini. Romi finds Rakshit standing alone and approaches to him. Rakshit asks him to walk away. In his anger, he throttles Romi.

Omi escapes from his trap while Rakshit runs behind him. Pishachini gets excited to see small school girls in the mall. Drishti gets suspicious about her and keeps a check on her activities.

Romi bumps into Divya and takes her away to meet Rakshit. Drishti sees them together and follows. Mahima and Chetan see Rakshit alone.

Mahima decides to approach him and make him remember his past. Chetan touches Rakshit. Rakshit bites him and later runs after Mahima.

Divya uses her powers to stop Rakshit. Drishti rushes towards Divya when she hears Mahima’s cries. All the people in the mall get scared on seeing Rakshit’s strange behavior.

Chetan, who turns into a zombie after Rakshit’s bite, attacks other family members. Divya and Romi tie Rakshit from the power strands.

The cops come to the mall. They decide to shoot all the infected creatures. Mahima tries to stop the cop from shooting Rakshit.

Divya rushes with a sword towards Rakshit while Drishti rushes to stop her. The two come face to face and eventually kill Raingini. All the people come out of the zombie spell. Though, they forget everything about the past.

Pishachini brings all the dolls along with her to Shergill house. She transforms them into kids back again and forces them to eat chocolates.

Rakshit lashes out at the family members when he finds that someone has split tea on Pishachini’s doll. Rakshit apologizes when Drishti makes him realize his mistake.