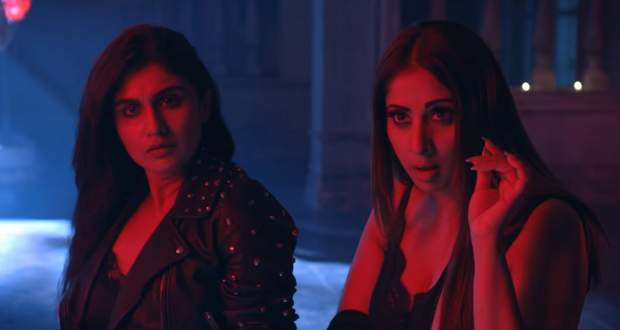 Today's Divya Drishti 29 Dec episode starts with Divya and Drishti deciding to go in the corner of the cave. Meanwhile, Pishachini meets Laal Chakor and ask for orders.

Divya and Drishti find a man in a red cape in the cave while Pishachini starts searching for the book. They are about to see the face of Laal Chakor when Pishachini burns the book.

They get surrounded by fire and they cannot see anything neither can use their powers. They start hearing noises while Shikhar rushes to Divya’s room.

Rakshit follows him but gets distracted by the voice of an instrument. He meets Chikki who tells him that she has been attacked by a bird.

Divya, Drishti and Rakshit promise Mahima that they will not go in the cave. Rakshit realizes that his knife is not with him while it is with Chikki.

Divya finds the knife in Chikki’s and she gets suspicious about her. Later, Chikki acts as she was forced to do work for Pishachini.