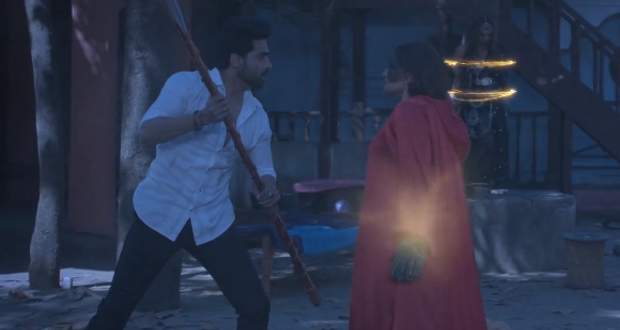 Today's Divya Drishti 2 Feb episode starts with Divya getting saved from Laal Chakor. They have planned to bring Laal Chakor in their Ambaad home to expose him.

Drishti has instructed that Divya should release blue smoke if everything gets done and red smoke if she is in danger. Meanwhile, Divya gets emotional to see dead bodies of Romi and Aish and later completes her task.

She also finds out that one body is missing. Divya hides under the covers and distracts Pishachini. Later, Laal Chakor is sure that someone has come into the house.

Divya gets stuck in the house while Drishti is unable to open the box. Drishti and Rakshit decide to create an artificial earthquake to get Pishachini and Laal Chakor out and save Divya.

Laal Chakor opens a window and Pishachini starts chanting Mantras to stop the earthquake. Drishti attacks her and Divya jumps off the window when Pishachini is distracted.

Later, Pishachini finds a slip in Romi’s hand with Ambad’s address written on it. Laal Chakor and Pishachini decide to visit the place.

They trap Lal Chakor and Rakshit is about to kill him when Laal Chakor exposes himself. Everybody gets shocked to see Mahima as Lal Chakor.

Drishti uses his powers and learns that everything was done by Mahima. Rakshit is devastated while Mahima leaves without saying anything.

Drishti tries to console Rakshit who is not ready to believe his mother can be a killer.

Upcoming Divya Drishti episode update: Mahima reveals that she will bring back all Shergills if Rakshit does what she says.

© Copyright tellybest.com, 2018 & 2019. All Rights Reserved. Unauthorized use and/or duplication of this material without written permission from tellybest.com is strictly prohibited.
Cached Saved on: Saturday 6th of June 2020 11:28:43 PMCached Disp on: Thursday 2nd of July 2020 02:16:02 PM