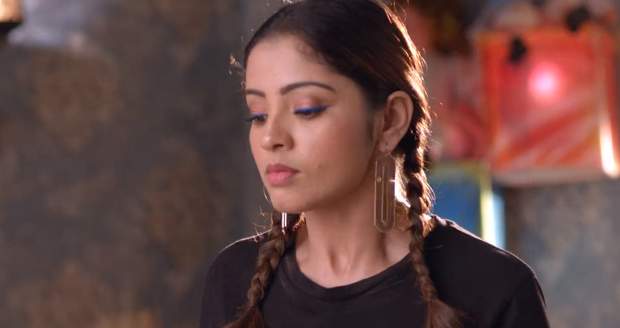 Today's Divya Drishti 2 Nov episode starts with Patali searching something while Pishachini investigating her. Pishachini further discovers a big hole in the garden.

Shikhar finds her magical weapon in Divya’s room. He further goes into Mahima’s room and sends her outside while he starts taking the jewelry.

Pishachini enters the hole and finds a tunnel build with magic. Shikhar tries to escape from Devdi but is called by Mahima. Meanwhile, Pishachini uses her magic to find Shikhar in her Devdi.

Patali calls the leaf fairy and makes medicine to turn into Divya. Meanwhile, Shikhar gets trapped with Shergills but later escapes.

Patali turns into Divya and traps Pishachini in a cage. Shikhar enters a room to go in Devdi while Patali disguised as Divya enters the room.

Patali runs away when real Divya comes while Shikhar enters the Devdi. The play starts and Shikhar puts the money in a bag of Laila’s memories.

The play continues with Laila and Majnu's story while Patali wishes to take Divya’s place. Meanwhile, Pishachini escapes from the cage and finds the tunnel in Devdi.

Divya gets unconscious after drinking the water kept by Patali. Pishachini finds Shikhar in the Devdi and tries to stop him from making the tunnel further.

Shikhar is unable to open the tunnel and resumes with the play. Patali disguised as Divya joins him in the play and does overacting.

Shikhar escapes taking the bag while Pishachini arrives dressed as Gabbar. Shikhar sees a spark of light in Divya’s dummy while Rakshit brings him back in the play.

Upcoming Divya Drishti episode update: Pishachini reveals that Shikhar is fake and is stealing their money while Divya’s life is in danger.