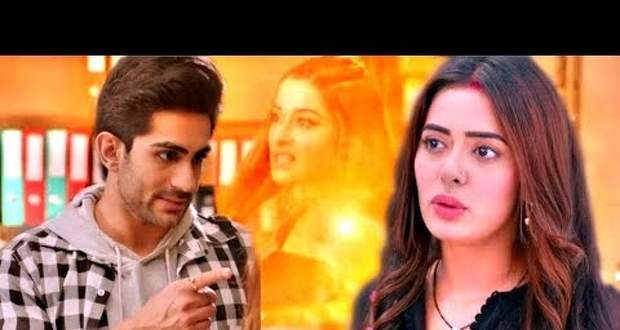 Today's Divya Drishti 30 Jun episode starts with Pishachini meeting Anjaan and stating that she will soon unmask him.

She tells Anjaan that she will kill someone dear to Drishti and Divya to snatch the Kaal Vijay gem from them.

Drishti searches for Rakshit in the house to warn him against the approaching threat. She sees Pishachini along with Anjaan.

Drishti brings Rakshit to a Shiv temple. She says she is his wife and not Lavanya.

Drishti states to Rakshit that she knows he is Anjaan. Rakshit admits that he is Anjaan. The two get into an argument for hiding secrets from each other.

Drishti asks Rakshit if Pishachini knows that he is Anjaan. Rakshit states that Pishachini is unaware of his truth.

Rakshit tells Drishti that Pishachini has planned to kill a person dearest to them so that she can get the Kaal Vijay gem.

Lavanya meets Pishachini and says that she will use Datura fruit to make Drishti and Divya powerless. Drishti gets the glimpse of a woman attacking someone.

Before she could see the complete future, Lavanya hits her with the datura.

Lavanya comes to Rakshit and asks him to tie the thread of her blouse. Rakshit avoids helping Lavanya.

Drishti tells Rakshit about her future glimpse. Drishti’s dress’ thread opens mistakenly. Rakshit ties it. He says he can tie the thread because she is his wife.

Pishachini instructs Lavanya to tie the mogra bracelet in everybody’s hand. She also asks her to make the family members drink the poisonous drink.

Mahima stops Drishti from attending the puja. Drishti says that she will get Rakshit arrested for marrying Lavanya illegally. Drishti and Rakshit perform the puja.

Pishachini tells Anjaan that she has decided to kill Divya. Shikhar overhears their conversation.

Pishachini talks to herself and says that she intentionally took Divya’s name.

Divya and Romi collect all the weapons from their house and hide them. Shikhar tells Drishti that Pishachini has planned to kill Divya.

Divya fails to use her powers. Drishti tells Divya that she will bring Kaal Vijay gem to defeat Pishachini.