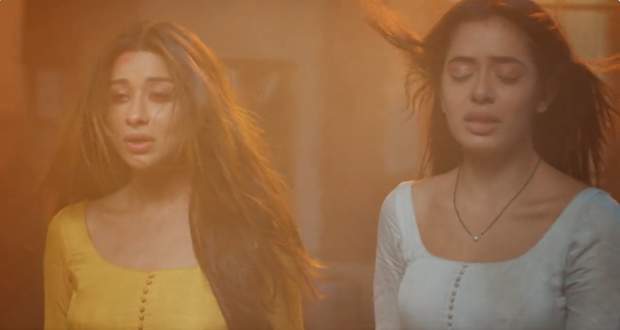 Pishachini asks Drishti to come out and hand over the flower to her. Rakshit tries to join Divya in helping Drishti but she asks him to be with family members.

Divya finds Drishti. Pishachini asks Drishti to give the flower to her or else she will blast the bombs. Divya tells Drishti that there is no one in the building.

Pishachini warns Divya that Shikhar will soon come here and attack her. Divya responds to her by saying that she has killed Shikhar.

Drishti lashes out at Divya to make her walk out of the building. Pishachini mocks at them. Divya asks Pishachini to give the gem to her or else she will blast the bombs.

Pishachini refuses to trust them. Drishti and Divya blast the bombs which set the building on fire. Pishachini loses all her gems.

Pishachini tells Kaal devta that on the 13th day of Drishti and Divya’s death she will take away her gems from them.

Shergill family craves in pain thinking about the death of Drishti, Divya, Shikhar, and Rakshit. Mahima gets a panic attack. Pishachini comes there and mocks at their pitiful condition.

A new villain enters Shergill house. She tells Pishachini that she is Raingili and has come from hell to help her.

The Shergill family members act weirdly as they crave for the special lassi prepared by Pishachini. Mahima and others address Pishachini as their Mallika.

Pishachini troubles all the family powers using her powers. Kaal Devta waits for Pishachini. He gets angry at Pishachini for not remembering the tehrvi date.

Mahima gets a call from the hospital about a person who has slipped into coma. She gets worried. The person is Rakshit.