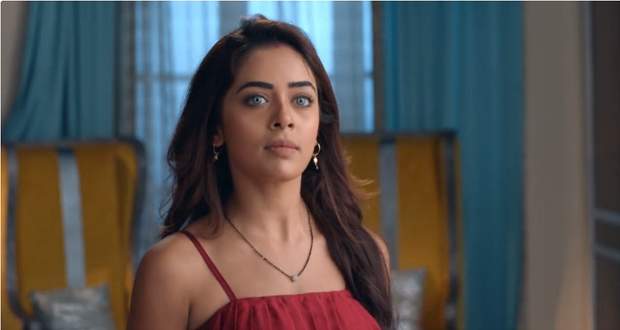 Today's Divya Drishti 3 Aug episode starts with Drishti craving in pain while being stuck inside the mirror maze. Kaanch Rani comes to Rakshit and hugs him lovingly.

She enacts to act sweet like Drishti in front of her but Rakshit got suspicious on her when he didn’t see the bite mark on her shoulder.

Kaanch Rani talks rudely with Rakshit but tries to cover up her loophole with a lie. Rakshit manipulates her by saying that he will not bring the gem as he wants to save her life.

Drishti writes a hint on the foggy mirror. Unfortunately, Pishachini comes there and rubs off the hint. She decides to trap Divya in her plan.

Rakshit comes to Divya and states that he is doubtful on Drishti’s behavior. Pishachini comes there and shows them the glimpse of Chetan in a miserable state.

Rakshit and Romi leave to save Chetan from Pishachini. Rakshit gives a dagger to Shikhar as a weapon to defeat Pishachini.

Kaanch Rani enacts to get friendly with the family members. Meanwhile, Shikhar and Divya get into an argument. Divya questions Shikhar for supporting Pishachini earlier. She says she doesn’t trust him.

Drishti meets Mahima and shows her Kaanch Rani avatar to her. Mahima gets scared on seeing her. Kaanch Rani throws Mahima inside the mirror maze.

Kaanch Rani converts Ojaswani as well in her mirror avatar. She sends all the family members inside the mirror maze.

© Copyright tellybest.com, 2018 & 2019. All Rights Reserved. Unauthorized use and/or duplication of this material without written permission from tellybest.com is strictly prohibited.
Cached Saved on: Tuesday 7th of July 2020 11:00:39 AM