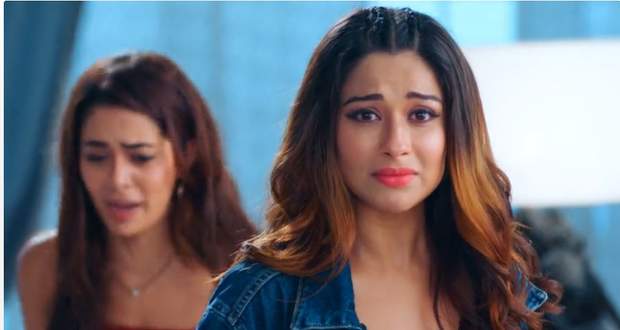 Divya tells Rakshit that she has brought the Kaal Vijay gem.

Rakshit gets worried. The door to hell opens and an ice storm hits Drishti. Pishachini attacks Divya to steal the gem from her.

Rakshit counters Pishachini with his powers. Pishachini comes and throws Rakshit inside the mirror. She hits Divya hard when she tries to stop her.

A fake Rakshit forms from the broken pieces of mirror. Meanwhile, accuses Rakshit of not recognizing real Drishti.

Rakshit tells Mahima that he never gave the gem to Pishachini as he was suspicious on fake Drishti. He uses the gem to treat Drishti.

Drishti comes out of the mirror maze with the help of Kaal Vijay gem. Divya tells Kaanch Rani that the gem is not with her.

Real Drishti comes in front of Divya. Divya gets shocked to see two Drishti’s. Divya fails to trust Drishti. Drishti tells Divya that the girl standing next to her is Kaanch Rani.

Drishti stabs Shikhar and he breaks down into pieces. Real Shikhar comes back. Drishti stabs all the mirror statues and brings her family members back.

Fake Rakshit runs away when Drishti tries to stab him. However, soon he breaks down into pieces when Drishti throws Kaal Vijay gem at him.

Pishachini catches hold of the gem while Rakshit comes back. Divya and Rakshit fail to attack Pishachini because of the Kaal Vijay gem.

Pishachini ties Shergill family members together with a rope and pushes them into the pool. She brings storm in the pool.

Pishachini tries to combine the powers of her gems but fails. She calls out her guru for help.

Romi and Chetan return to Shergill house and help the family members in coming out of the pool. Divya gets delighted to get her powers back.