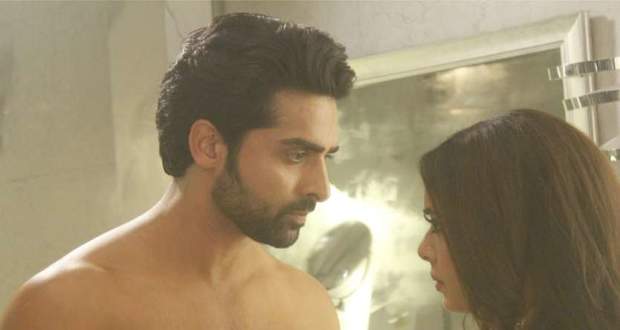 Today's Divya Drishti 7 Jul episode starts with Mahima heading towards Ojaswani and her daughters with a sword. Simran runs out of the room and bumps into Drishti and Divya.

She tells them about Mahima. Divya’s powers fluctuate as and when she puts her leg on mogra bracelet.

Drishti learns that because of the datura they have lost their powers. Divya and Drishti rush towards Ojaswani’s room.

Mahima catches hold of Drishti and tries to stab her. Rakshit stops her. Divya uses her powers on Mahima and locks her in the room.

A stranger saves Simran from getting hit by Divya’s mother’s car. The lady takes Simran and the stranger to the Shergill house.

Pishachini uses her powers on Shikhar to make him hallucinate about Divya and Romi getting cozy. Shikhar fumes in anger.

Drishti and Rakshit head towards Shikhar. Mistakenly, Rakshit drops the sword on the floor. Pishachini takes away the sword.

Later, Drishti tells everyone that Pishachini is playing mind games with them.

Lavanya frees Mahima from the room. Mahima heads towards her target.

Simran tells the family members that her Santa saved her. Rakshit rushes to meet the stranger. Mahima approaches Drishti with the sword.

The stranger comes in between and takes the attack on his body. Rakshit addresses the stranger as his father. Later, Mahima comes out of the spell.

Ojaswani questions Mahima for attacking them. She also points out on Divya and Rakshit’s powers.

Pishachini comes to the Shergill house. She reveals about the superpowers of Drishti and Divya.

Pishachini asks them to get the Kaal Vijay gem within two hours to save Rakshit’s father’s life. Mahima apologizes to Drishti for misunderstanding her.

Drishti says to Divya that we should bring the Kaal Vijay gem but Divya opposes. They take the help of Chiranjeevi.

Rakshit requests Drishti to bring the Kaal Vijay gem but Divya refuses. Drishti says we will have to find the creature that has come out from the Hell to save Rakshit’s father.

Drishti and Divya doubt Lavanya to be the strange creature.