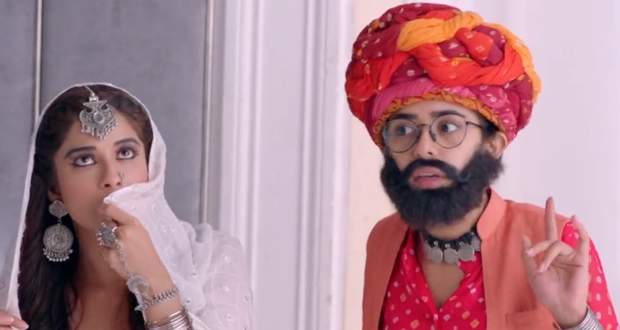 Today's Divya Drishti 8 Sep episode starts with Drishti showing the sindoor to remind Rakshit that their marriage had happened and Drishti is his wife and no one else.

But Rakshit is still confused and believes Pishachini is his wife.

In the morning, everyone in the Shergill house wakes up feeling very old in their appearance.

They have dark circles, grey hair, and wrinkles in their body. Pischachini laughs at everyone.

After that, Pishachini comes to meet Rakshit. Drishti asks Rakshit not to discuss anything about what they have discussed about their marriage.

Drishti disguises as a man and escapes from the room while Pishachini enters the room.

When Drishti comes out, Divya consoles Drishti that Rakshit will his memory very soon.

When Rakshit comes out of the room, Drishti asks him what she talked with him in the room but Rakshit couldn’t remember anything.

Now, Drishti realizes that she has the power of making someone to forget the things.

In the meantime, Pishachini plans to kill everyone in the entire Shergill’s family except Rakshit within 3 days after getting the 3 gems. She wants to keep Rakshit as her husband.

Now, Mahima tries to give medicine to Rakshit to make him all right but Pishachini stops that and threatens Mahima not to try anything again.

At the same time, Drishti shows her real face to Mahima and tells the truth about why she is disguised as a man.

After the Pooja is done, Pishachini makes Mahima fall down but Divya stops her. Now, Drishti sees that the Chandelier is going to fall down again.

Divya and Drishti both plan together and stop it from falling down.

Pishachini takes everyone to the terrace and ready to push them to the ground.

Upcoming Divya Drishti episode update:  Everyone gets saved by Divya & Drishti and  Pishachini threatens everyone to tell about who had saved them.